JAHANABAD, Pakistan -- When the Taliban blew the face off a towering, 1,500-year-old rock carving of Buddha in northwest Pakistan almost five years ago, it fell to an intrepid Italian archaeologist to come to the rescue. 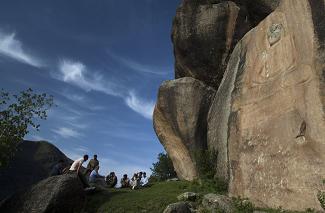 << In this May 24 photo, people sit near a sculpture of the Buddha whose face was destroyed by Taliban fighters at Jahanabad, Pakistan, in the Swat valley. (AP-Yonhap News)

Thanks to the efforts of Luca Olivieri and his partners, the 6-meter-tall image near the town of Jahanabad is getting a facelift, and many other archaeological treasures in the scenic Swat Valley are being excavated and preserved.

Hard-line Muslims have a history of targeting Buddhist, Hindu and other religious sites they consider heretical to Islam. Six months before the Sept. 11, 2001 attacks, the Taliban shocked the world by dynamiting a pair of 1,500-year-old Buddhist statues in central Afghanistan.

The Jahanabad Buddha, etched high on a huge rock face in the 6th or 7th century, is one of the largest such carvings in South Asia. It was attacked in the fall of 2007 when the Pakistani Taliban swarmed across the scenic Swat Valley. The army drove most of them out two years later, but foreign tourists who used to visit the region still tend to stay away.

Olivieri himself had to leave in 2008 after more than two decades of tending to the riches dating back to Alexander the Great and the Buddhist, Hindu and Muslim invaders who followed. The 49-year-old head of the Italian Archaeological Mission in Pakistan returned in 2010 and is back at work.

Taliban militants climbed ropes to insert explosives in holes drilled into the face and shoulders of the Jahanabad Buddha, said Olivieri. The explosives in the shoulders failed to detonate, but the others blew off most of the face above the lips and cracked other parts of the carving and surrounding rock.

Olivieri and his team began work this month on fixing the cracks and what’s left of the face. A full reconstruction is impossible because detailed documentation and fragments of the face are lacking.

“Whatever you do in the absence of perfect data is a fake,’’ said Olivieri, who says he has wanted to be an archaeologist since age 6 and still brings a youthful exuberance to his work even as his beard grows gray.

Arriving as a university student in 1987, he was fascinated by Swat, once an important center of Buddhist culture and trade. The monk credited with introducing Buddhism to Tibet, Padmasambhava, was born in Swat.

In more recent decades, the area was known as “the Switzerland of Pakistan,’’ popular with religious tourists from China, Japan and South Korea, and the hope is that restoration of the Jahanabad Buddha will spark a revival of tourism here.

Olivieri’s mission is funded by the Italian government, which works with local Pakistani antiquities authorities. It has uncovered over 120 Buddhist sites among Swat’s soaring hills and rushing rivers. Of roughly 200 Buddhist rock carvings in Swat, the Jahanabad Buddha was among the few to survive with its face intact for so long, said Olivieri. Most were defaced centuries ago by Muslim invaders who, like the Taliban, consider Buddha a false idol.

Maulana Shamsur Rehman, a leading Islamist politician in Swat, says the attack on the Buddha should never have happened. Islam preaches freedom and protection for followers of all religions, he told The Associated Press, and “in line with Islamic rules, nobody should have an objection to the repair work on the Buddha statue.’’

In 2001, militants damaged the excavated ruins of a 7th century Hindu temple in Swat overlooking a stronghold conquered by Alexander in the 4th century B.C. Unable to protect the temple, the Italian mission had to rebury it.

Ironically, the site that Olivieri was most worried about during the Taliban’s violent reign in Swat was an Islamic one ? the roughly 1,000-year-old Udegram Ghaznavid mosque, the third oldest in Pakistan. He feared the militants would occupy and damage it, but that never happened.

Pakistani security officials say the Taliban are again trying to infiltrate Swat, but militants are not the only threat to the archaeological sites. Looters are perhaps a bigger problem. Many relics looted from Swat are in private and public collections around the world.

In December police arrested several men in Swat and seized a roughly one-meter-tall, 1,800-year-old Buddhist statue that could have fetched tens of thousands of dollars on the international antiquities market.