KATHMANDU, Nepal -- The Lumbini Development Trust (LDT) has stated that the arrival of tourists in Lumbini has increased considerably this year. 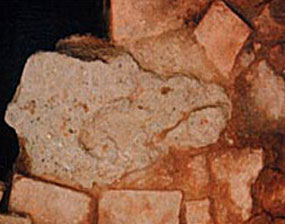 << The Marker Stone which marks the exact birthplace of Lord Buddha in Lumbini, Nepal.

According to a data provided by the LDT, over 385 thousand tourists, both domestic and foreign, have already visited the birthplace of Lord Buddha this year. The number last year was around 263 thousand only.

Chief of the Liaison Section of the LDT, Raj Bharati, said tourists from all over the world, Buddhist nations in particular, visit the holy site of the Buddha’s birth every year. He said mostly the Nepalese and Indians visit Lumbini, along with tourists from the third countries including Japan, Sri Lanka, Korea and Myanmar.

“The cease-fire of the Maoists has also contributed to the rise in the number of tourists in Lumbini,” Bharati said, adding that the development of tourist-friendly physical infrastructure has equally helped in promoting the visitors arrival. Lumbini is enlisted in the World Heritage Sites.

The Marker Stone, which marks the exact birthplace of Prince Siddhartha who later attained Buddhahood, is the centre of attraction for tourists.

The Marker Stone, it is believed, was consecrated by the Mauryan Emperor Ashoka during his pilgrimage to Lumbini in the 20th year of his accession to throne.