Timphu, Bhutan -- The National Assembly of Bhutan resolved that the formal ngedzin (recognition) of trulkus and lamas born in Bhutan would be conducted according to Bhutanese traditions and the rules of procedure framed by the committee which was established this year in accordance with the resolution of the 83rd session of the National Assembly. 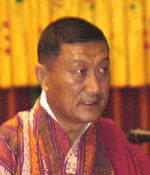 The Assembly also resolved that trulkus and lamas living outside Bhutan would have to follow the resolution of the 30th session of the Assembly, held in 1969, which said that a trulku or lam could choose to renounce Bhutanese citizenship and live in other countries.

The Assembly resolution came after a lengthy debate on the issue in response to a report submitted by the chairman of the Royal Advisory Council, Dasho Rinzin Gyeltshen, on November 21.

The Zhung Kalyon reported that, while the rules on the recognition of trulkus and lamas who were not Bhutanese citizens but were born in Bhutan were very clear in the resolution of the 30th session of the National Assembly they had not been implemented by the dratshang and the government. Meanwhile, the traditional system of recognising trulkus had not been followed by the government or the dratshang.

As a result of the growing problems in the ngedzin of trulkus and lamas the 83rd session of the National Assembly, in June, 2005, had resolved that a committee should be established to formalise the recognition of trulkus and lamas. A high-level committee was established in August, 2005, chaired by the Dorji Lopon (principal assistant of the Je Khenpo in charge of religious teachings). The members were Drabi Lopon (master of literary studies) of the Zhung Dratshang, the Zhung Kalyon, the eminent Ningma lam, Lam Kinzang Wangdi, Sungtruel Rinpoche (speech incarnation Terton Pema Lingpa), Dasho Sigay Dorji of the Royal Advisory Council, the home secretary, Dasho Penden Wangchuk, and the secretary of the dratshang Lhenstshog, Dasho Sangay Wangchug.

The Kalyon said the committee had gravely acknowledged the importance and significance of its profound responsibility because a trulku was an enlightened person who had achieved freedom from the encumbrances of the karmic wheel of rebirth and the pure actions of the trulku would have a positive impact on human society.

On the basis that it was of vital importance to establish clear and strict procedures for the recognition of Bhutanese and other trulkus born in Bhutan the committee had drawn up a 14-point rules of procedure for the ngedzin of trulkus and lamas in September, 2005. This included the traditional practice of recognition by the trulku of the biographical sketch and details of his past life.

The committee also re-affirmed the important practice of the right upbringing and spiritual training of the confirmed trulkus noting that, although this tradition had always existed in Bhutan, it was not implemented by the dratshang and the government.

The Ministry of Home and Cultural Affairs had also been instructed to maintain a list of confirmed trulkus born in Bhutan.

The Zhung Kalyon submitted to the National Assembly that there were problems when the recognition of a trulku was not systematically confirmed, based on the biographical sketch and on the authenticity of the formal recognition process.

For example, the families and supporters of two boys had recently claimed that the boys were the reincarnation of the Zhabdrung. The committee discovered that one boy was already eight years old and was, therefore, born four years before his predecessor had died so a verification was not even relevant. The committee had asked the father of the second boy and Khenpo Tshoki Dorji, who was his supporter, to introduce the boy to the committee.

At a special meeting of the committee in the Lamai Lhakhang of Tashichhodzong, in the presence of the boy and his parents, His Holiness the Je Khenpo laid the premise of the recognition of the Zhabdrung. His Holiness said that the Zhabdrung was the supreme spiritual guardian of Bhutan and the incarnations of his Speech, Mind, and Body had strengthened the Buddha dharma tradition in Bhutan over the centuries, benefiting all sentient beings. His Holiness also reminded the committee and the claimant that, while the Zhabdrung had been manifested many times, he had never been recognised outside the country.

The Kalyon explained the findings of the verification process to the Assembly members.

The committee found that, based on the statement of Choechong Tseumara, who claimed to be a medium, the supporters of the claimant had repeatedly appealed to Karmapa Ugyen Thinley in India to recognise him as the Zhabdrung. In the past the medium had been sentenced by the court for misleading the local people in Trongsa in several other incidences. The Ministry of Home and Cultural Affairs was in possession of two letters from Karmapa Ugyen Thinley, one which recognised the boy as the Zhabdrung and a subsequent letter which explicitly revoked the recognition. The committee also found that the claimant was not even two years old so he was not old enough to identify himself.

It was obvious to the committee that, based on these three main findings, there was no question of the claimant being a reincarnation of the Zhabdrung.

The Kalyon reported that Khenpo Tshoki Dorji acknowledged his mistake.

Given the experience of the committee the Kalyon submitted three recommendations made by the committee: the Ministry of Home and Cultural Affairs should strictly follow all the established laws, rules, and procedures; it should discourage the support of false claimants within or outside the country; and the ministry should also ask people with ulterior motives not to interfere in Bhutan’s internal matters.

The Zhung Kalyon reported that the home ministry had issued a letter to all dzongkhags to submit the details of the trulkus including the name, the reincarnation identity, age address, and how the reincarnation was confirmed.

As many members took the floor, the Haa chimi warned that the emerging trend of false trulkus and lamas could lead to problems in the country. He said that his dzongkhag was investigating the issue, as instructed by the government. The Mongar chimi said that, as many people were claiming to be trulkus the formally recognised reincarnations should be accepted but action should be taken against people who were found to be false claimants.

The Chang chimi proposed that Bhutan should continue to follow a circular issued by the late home minister, Lyonpo Tamzhing Jagar, who had pointed out that, since there were many sacred heritage and sites to be preserved within the country, Bhutanese people should not make contributions outside the country. He said that people should not be allowed to encourage false lamas and trulkus to go out of the country to make money.

Royal Advisory Councillor, Dasho Sigay Dorji, said that Bhutanese trulkus, whether they were incarnations of Bhutanese or other lamas, were leaving the country in a clandestine manner and seeking wealthy supporters. The government should not issue passports to such people and not recognise their claims of reincarnation. If the reincarnation of a foreign lam was born in Bhutan, they should seek the approval of the government to take them back to their country. The recognition of a reincarnation born in Bhutan should be left solely to the committee in accordance with the traditional system of recognising trulkus.

The Minister for Home and Cultural Affairs, Lyonpo Jigmi Thinley, reported to the Assembly that there were 64 officially recognised trulkus in Bhutan: five in Bumthang, five in Trongsa, seven in Thimphu, six in Punakha, one in Pemagatshel, three in Wangduephodrang, nine in Lhuentse, three in Trashigang, one in Sarpang, one in Mongar, four in Samdrup Jongkhar, one in Dagana, eight in Trashiyangtse, and six in Paro. He said that many of them were not residing in Bhutan since they were reincarnations of Tibetan lamas, adding that the detailed report would be submitted to the committee.

The home and cultural affairs minister assured the Assembly that, in future, the government would strictly adhere to the rules and procedures framed by the committee.

He added that Bhutan was a Buddhist country where people had full faith in the Buddha dharma. If people attempted to take young trulkus away from their villages without the knowledge of the community leaders and lamas and lopons in the dzongkhags the government should take action against them. Meanwhile, the two claimants as the reincarnation of the Zhabdrung were false and should not be recognised by anyone.

Lyonpo Jigmi Thinley said that the ministry was aware of the circular issued by the late Lyonpo Tamzhing Jagar. He added that Bhutan was a part of the international community and enjoyed good relations with many friendly countries. Development partners, including governments, private individuals, and non-government organisations made their contributions through the UN agencies and international organisations. It was, therefore, inappropriate to stop making contributions to religious institutions in other countries.

The Speaker of the National Assembly, Dasho Ugyen Dorje, said that the Ministry of Home and Cultural Affairs, as resolved by the Assembly, should take appropriate action to discourage people who supported and encouraged false claimants, whether they were civil servants, businessmen, monks, or members of the public.