PUNAKHA, Bhutan -- High in the Himalayas, above this peaceful valley where farmers till a patchwork of emerald-green fields, an icy lake fed by melting glaciers waits to become a "tsunami from the sky." 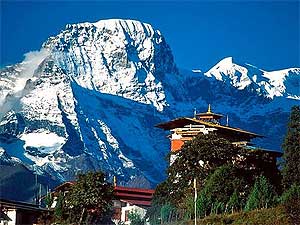 The lake is swollen dangerously past normal levels, thanks to the global warming that is causing the glaciers to retreat at record speed. But no one knows when the tipping point will come and the lake can take no more, bursting its banks and sending torrents of water crashing into the valley below.

Such floods from above have hit Punakha before, most recently in 1994, a calamity that killed about two dozen people and wiped out livelihoods and homes without warning. But scientists say a new flood could unleash more than twice as much water and be far more catastrophic.

Unfortunately, Punakha's residents are not alone in this picturesque Buddhist kingdom in having the threat of death and destruction hanging over their heads like an environmental sword of Damocles. Because of Earth's rising temperatures, at least 25 glacial lakes in Bhutan are at risk of overflowing and dumping their contents into the narrow valleys where much of the country's population lives.

Like many poor countries, isolated Bhutan is paying for the environmental damage wrought by the developed world and the expanding economies of nations such as China and India.

But the added, perhaps more bitter, irony here is that Bhutan probably has done more to safeguard its environment than almost any other country.

A land of breathtaking vistas, little pollution, and great biodiversity, Bhutan regards conservation as one of its most important public-policy goals - an anchor of "gross national happiness," the quirky measure of development concocted by the former king.

Sustainable development is the official mantra. By law, the country's forest cover, including blue pine, cypress, spruce, and hemlock, must never drop below 60 percent. Snow leopards, Himalayan black bears, barking deer, and red pandas roam unmolested in the national parks and wildlife reserves that account for one-quarter of Bhutan's territory.

A sanctuary in the east is famous as the only one in the world set aside for the yeti - or "migoi," the mythical Abominable Snowman.

"This country is committed to being conducive to environmental sustainability and not to be harmful to the world, but the impact of climate change is coming anyway," said Doley Tshering of the United Nations Development Program office in Thimphu, the capital.

Some shifting weather patterns already are being felt.

"The winters are not so cold. The hot season is arriving much earlier," Tshering said. But possibly the most dramatic effect of global warming on Bhutan can be seen in its glaciers - or, perhaps more accurately, not seen.

On satellite images taken in 2000 and 2001, some of the smaller ice sheets along Bhutan's 200-mile stretch of the Himalayas no longer could be found, according to a report last year by the International Center for Integrated Mountain Development and the UN Environment Program.

Researchers estimate that Bhutan's glaciers are retreating by as much as 100 feet annually. The loss has grave consequences for the country's long-term development, because Bhutan relies heavily on selling hydroelectric power, which accounts for about one-third of national revenue.