The 11 galleries of the Ta-dzong museum

Timphu, Bhutan -- The newly consecrated Ta-dzong museum gives a glimpse of Bhutan in the last 100 years with two galleries showcasing the history of monarchy in Bhutan with many royal possessions. 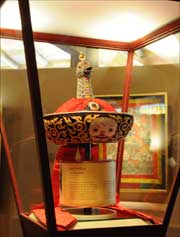 Starting from the ground floor the first gallery showcases the guardians of the four directions, Gyelchhen Zhi, that protects the entrances to monasteries and temples and ward off evil influences from all directions.

The second gallery describes the foundation of Trongsa Dzong, its deities and holy men. It houses a statue of Yongzin Ngagi Wangchuk (1517-1554) who founded the Trongsa Dzong in 1543, his jacket and robe, diamond scepter and bell, statues of the Zhabdrung’s father, Tenpai Nima (1567-1619), Zhabdrung Rinpoche and Choegyel Minjur Tenpa, the first Trongsa Penlop and the third Druk Desi.

A special feature of the third gallery is the Raven Crown, designed by Lam Jangchub Tsendrue and worn by Gongsar Ugyen Wangchuck. It also houses the images of Jigme Namgyel’s protective deity, Tadin (Hayagriva) and Palkhorlo Dompa (Chakrasamvara), a statue of Lam Jangchub Tsendrue and Nyep Garab Wangchuk (local deity), ceremonial silk textile belonged to the first King and four chests of Jigme Wangchuck that were used in the Wangdue Choling palace in Bumthang to store personal belongings of the royal family and the King.

The fourth gallery has a silk kira and tego of the first Queen Ashi Choden, the oath of allegiance that was signed on a 3.5 meter scroll by the representatives of clergy during the coronation of second King in 1926, Jigme Wangchuck’s prayer book and silver box, King Jigme Dorji Wangchuck’s amulet, ivory flask, container for betel, areka and lime, and a zenith radio. It also showcases a sword, gho, scarf and traditional boots belonging to His Majesty the Fourth Druk Gyalpo, a self created Pema Lingpa bronze statue and a wooden phurba (dragger).

The fifth gallery showcases the message of the sacred dances including the wheel of life, masks and costumes while the six gallery is about Buddhism and rituals with the images of Shacha Muni Buddha, Maitreya Buddha (Gyaltsab Jampa, also known as the future Buddha), Dorji Phurpa (Vajrakila) and a magic dragger.

A Khesar Ling lhakhang is on the seventh gallery and the statues of Guru Rinpoche, His eight manifestations in the eighth and Maitreya Buddha lhakhang in ninth gallery.

The five Tathagata Buddhas (Gyalwa Rignga) sit in the tenth gallery. Each of the Buddhas represents one of the five transcendental insights, which are antidotes to the five mental poisons; anger and hatred, pride, desire and greed, envy and jealously, delusion and ignorance.

The top gallery showcase the body, the speech and the mind of the Adibuddha. It also houses a sacred image of Sung Joenma Dorji Chang, self-spoken Vajradharna.
TOP