Timphu, Bhutan -- Consecration of the 169-foot bronze statue of Buddha Dordenma, Vajra Throne Buddha, being constructed at Kuensel Phodrang in Changbangdu, overlooking the capital city, will be completed by October next year, said one of the main sponsors, Wong Kiam Seng. 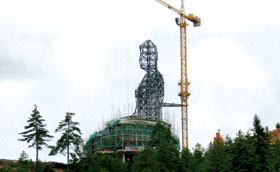 Wong Kiam Seng, who is in the country, along with other sponsors from Hongkong and Singapore, said, “We’re funding it because of our compassion for Buddhism,” adding that they are happy with the progress of the project.

Over USD 30 million has been spent on the project so far, said Wong.

Experts will be flying in to study the landscape, to identify the plants and soil erosion protection, said Wong.

The project, initiated by the chairman of Menjong Chhothuen tshogpa, Lam Tshering Wangdi, began in 2007, coinciding with the hundred years of monarchy.

The gigantic bronze structure, including the thri (throne), will have enough space to house 17 storeys of different lhakhangs.  These include three storeys within the throne, two each inside the lotus, waist, chest, face and shoulder and one each in the legs, neck and head.

In the first two storeys, both 15 feet high, there will be 25,000 12-inch images of Buddha Dordenma, made of copper and gilded in gold, displayed around the walls of the meditation hall inside the throne. “The names of the individual sponsors of statues will be engraved on copper-plate with powder coating,” said Lam Tshering Wangdi in an earlier interview with Kuensel.

The first storey, which surrounds the centre, will house eight 10-foot standing bodhisattvas, the miracle sons of Buddha Shakyamuni.

The third storey inside the lotus seat will house six-feet high 16 arhats, King Hashang (Maitreya Bodhisattva), Dharmata Tiger, Sutra Holder and the four direction kings.  In the central chamber will be seated the main Buddha Shakyamuni.

The rooms from the third storey up to the top will accommodate 100,000 eight-inch statues of Buddha Dordenma, made of copper and gilded in gold, placed in multi-layered grid-boxes.

On his affinity towards the project and Bhutan, Wong said, “People here are very nice and the country is one of the best in the world.  Since we are Buddhist, we hope that Buddhism would flourish from here,” said Wong.

“We hope that the Buddha will bring happiness and luck for the Bhutanese people.”