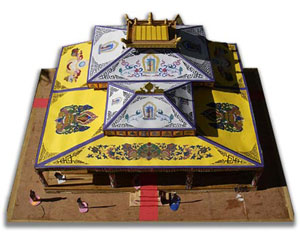 Monks and others, especially Tibetans in-exile, turned out in large numbers for the ceremony.

The 70-year old Buddhist spiritual leader fled to India after a failed uprising by Tibetans in 1959, nine years after China's People's Liberation Army marched into Tibet to establish communist rule. The Dalai Lama runs a government-in-exile in the hill station of Dharamsala.

Thousands of Buddhist students from colleges across India are camping in Amravati, which means “Deathless Realm” in the Buddhist scriptural language, for the main functions, which begin Thursday.

Around 100,000 monks, spiritual leaders and tourists from across the world are camping for the 10-day long ceremony.

Organisers of the Kalachakra thanked the provincial authorities for lending support.

The first four days of the Kalchakra ceremony are devoted to preliminary teachings. The initiation ceremony starts on the fifth day.

The Kalchakra (wheel of time) ceremony is a profound system of teachings and practice of the Buddhist faith.

The ritual was first performed by Lord Buddha over 2,500 years ago at the request of King Shambhala, who ruled a mythical or historical kingdom located beyond the Himalayas.

And the Alternative Kalchakra, which is the third stage, consists of the practice of purification undertaken by an individual. Its importance also lies in the fact that the faithful believe that the initiation helps in promoting world peace, harmony and brotherhood.