NEW DELHI, India -- Exiled Tibetan spiritual leader the Dalai Lama is in a stable condition after surgery in India to remove gallstones and is likely to be discharged in the next two days, hospital officials said Saturday. 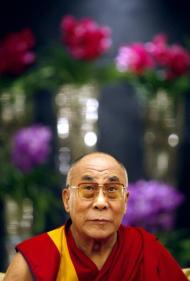 The Buddhist leader had the keyhole procedure in New Delhi on Friday, a day after he was hospitalised for medical tests after suffering abdominal pain.

A similar episode in August had forced him to cancel his engagements and rush to a hospital in Mumbai.

"He is doing fine. He will be discharged maybe in a day or two," said an official at the city's Ganga Ram hospital, where the Nobel laureate is being treated.

The Dalai Lama's spokesman, Tenzin Taklha, told AFP Friday that the operation had gone well and that the 73-year-old Buddhist leader would resume his busy schedule by the end of the month.

Although he was released from hospital on September 1 after four days of tests following the earlier bout of pain, his office also cancelled a planned tour to Germany and Switzerland in October due to health reasons.

In the weeks preceding his illness, the Dalai Lama, a 1989 Nobel Peace Prize winner, had pursued a hectic international itinerary as he campaigned for improved human rights in Tibet while China hosted the Olympic Games.

The charismatic Buddhist fled to India in 1959 following a failed uprising in Tibet against Chinese rule and has since lived in the northern Indian hilltop town of Dharamshala, where the Tibetan exile government is based.