Indian Buddhists Pilgrimage through the Himalayas 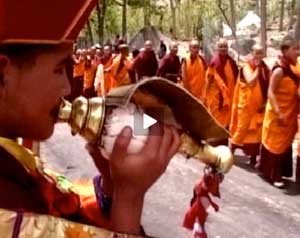 They crossed five Himalayan mountain passes during the journey, at altitudes of up to five thousand meters above sea level. The pilgrims were greeted in an official ceremony by monks from the Hemis monastery.

The pilgrimage was led by the 12th Gyalwang Drukpa Rinoche, who wanted to educate people along the way on the environment, education and healthcare.

The group visited holy sites along the way.