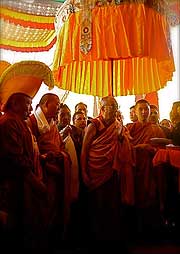 During the ceremony, Mendel Tensum (auspicious offerings) and long life prayers (Tenshug) were offered to His Holiness the Dalai Lama.

H.E. Khangsar Shabdrung Rinpoche, in his opening speech said: “I take great honor to pay my solemn reverence to the holy lotus feet of the spiritual guidance of fellow sentient beings; the light of the world; the ocean of wisdom; Messiah of the people who are denied of their fundamental rights; Kalayanmitra of fortunate ones who is seeking the path of ultimate happiness; Buddha of present era; Noble laureate; His Holiness, the Dalai Lama, Tenzin Gyatso.”

His Holiness will give a Buddhist teaching today, followed by Avalokiteshvera Initiation on 11 July at the Sakya Monastery.

Coinciding with His Holiness the Dalai Lama's visit to Kaza, the Tibet Museum organised a photo exhibition to commemorate “50 Years in Exile” in coordination with Himalayan Buddhist Cultural Association.

In addition to express gratitude to the government and people of India, the three-day exhibition aims to enhance the cultural relationship between two Buddhist communities and promote awareness about Tibet.

Earlier from 2 – 7 July, the Tibet Museum organised series of photo exhibitions at Nubra valley, Sakthi valley, Chemdre, Leh, Ladakh and Zangskar at the request of the Ladakh-based Himalayan Action for Peace in Tibet.