Monastics turn their minds toward science

DHARAMSALA, India -- Tibetan monks and nuns spend their lives studying the inner world of the mind rather than the physical world of matter. Yet for one month this spring, a group of 91 monastics devoted themselves to the corporeal realm of science. 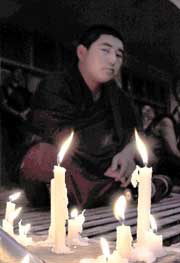 << Many Tibetan Buddhists never learn science and math. In monasteries and nunneries, the curriculum has remained unchanged for centuries. (ASHWINI BHATIA/Associated Press file)

Instead of delving into Buddhist texts on karma and emptiness, they learned about Galileo's law of accelerated motion, chromosomes, neurons and the Big Bang, among other far-ranging topics.

Many in the group, whose ages ranged from the 20s to 40s, never learned science and math. In Tibetan Buddhist monasteries and nunneries, the curriculum has remained unchanged for centuries.

To add to the challenge, some monastics have limited English and relied on Tibetan translators to absorb the four-week crash course in physics, biology, neuroscience and math and logic taught by teachers from Emory University in Atlanta.

But the monastics put morning-to-evening lectures into action. At a Buddhist college campus here in Dharamsala, the exile home of the Dalai Lama in northern India, red-robed monks and nuns experimented with pendulums, gathered plants in the foothills of the Himalayas that showed natural selection and bent their shaved heads over microscopes to view an unseen world.

Tibetan monks and nuns may spend 12 hours a day studying Buddhist philosophy and logic, reciting prayers and debating scriptures. But science has been given a special boost by the Dalai Lama, who has long advocated modern education in Tibetan monasteries and schools in exile, alongside Tibet's traditions. India is home to at least 120,000 Tibetans, the largest population outside Tibet.

Science may seem at odds with Tibetan religious rituals. Reincarnations of high Tibetan monks are identified through dreams and auspicious signs. The Dalai Lama credits the state oracle with helping him decide to flee Tibet in 1959 as Chinese troops advanced on Lhasa.

Yet the Tibetan spiritual leader views science and Buddhism as complementary "investigative approaches with the same greater goal, of seeking the truth," he wrote in "The Universe in a Single Atom," his book on "how science and spirituality can serve our world." He stresses that science is especially important for monastics who study the nature of the mind and the relationship between mind and brain.

Initial resistance from some senior monks and fears of diluting traditional studies in monasteries have gradually eased. Now the Dalai Lama hopes that, with help from Emory and other programs, science will become part of a new curriculum, with science textbooks in Tibetan and specialist translators, leading to a generation of monastic leaders that are scientifically literate.

There are other reasons for integrating science with Tibetan Buddhism. Tibetans marked the 50th anniversary of their exile this year, and a return to their homeland remains elusive. The need to keep Tibetan cultural identity alive, yet modern and relevant, has grown increasingly urgent as the 73-year-old Dalai Lama ages.

"If you remain isolated, you will disappear," said Lhakdor, director of the Library of Tibetan Works and Archives in Dharamsala, who goes by one name. The Dalai Lama has often remarked that isolation from the world only aided Tibet's fall to China.

Lhakdor sees similarities rather than contradictions between science and Buddhism. Like Buddhism, "the approach of science is generally based on unbiased findings through observation, analysis and finding the truth," he noted.

Others are more frank about the need to learn science.

"The 21st century is here," said Tenzin Lhadron, a forthright 34-year-old nun enrolled in this summer's science program. "Everybody is influenced by science. We want to know what it is."

She does not have formal schooling in spite of 19 years studying at a nunnery in Dharamsala. Math is difficult for her; fractions and percentages are completely new. "But I will try," she promised.

The Emory Tibet Science Initiative, of which this session was part, is now in its second year. It was preceded by the "Science for Monks" program, which started in 2001 with support from Bobby Sager, a Boston philanthropist. At the behest of the Dalai Lama, the earlier program brought science teachers from various American universities to teach Tibetan monks in India.

That program has matured into the Emory-backed plan to introduce modern science into Tibetan monasteries in India within the next few years with help from the Library of Tibetan Works and Archives.

The Emory initiative has led to a science textbook in Tibetan and English, produced by Emory professors and translators from the library. Translation conferences yielded a science glossary that introduces words like electromagnetism, climate change and cloning into the Tibetan lexicon.

The original Science for Monks program has morphed into an annual two-week Science Leadership summer program for advanced students who are all geshes, the monastic equivalent of a Ph.D. This year, it culminated in a first-ever "science fair" here from June 22-24. There, monks gave presentations on sound waves, the origins of the universe and how the brain works.

Emory envisions the summer course as a five-year program, with lessons becoming more advanced in successive years for returning students.

A third program, called Science Meets Dharma, has since 2002 sent European college graduates to teach basic science courses in Tibetan monasteries in India. When some monks enroll in the intensive science programs, they have already had a few years of science instruction.

Just how science will be taught in the monasteries is still in the works. Western faculty will teach to monastics for extended periods, but local Tibetan lay teachers will eventually be recruited to teach in monasteries year round. Science education already exists in the Tibetan exile school system that instructs 28,000 children and young adults in India, Nepal and Bhutan.

For the time being, university professors are needed for the summer science course. Monks and nuns may lack basic science education, but they are highly trained in other disciplines, like philosophy.

"They are sophisticated adult learners," said Mark Risjord, professor of philosophy at Emory who taught math and logic this summer. During his weeklong unit, inquisitive monks pressed him for a method to "make deductively valid rules" and asked if different arguments can lead to the same conclusion.

Although Buddhist scriptures have their own explanations of nature, the mind and the physical world, students were unfazed about seeming contradictions between Buddhism and western science.

"There are contradictions within Buddhist philosophy itself," pointed out Lobsang Gompo, a 27-year-old monk from Drepung monastery in south India. Tibetan Buddhists are already accustomed to analyzing multiple viewpoints, he said.

The Dalai Lama's confidence in "critical investigation" means that "if scientific analysis were conclusively to demonstrate certain claims in Buddhism to be false, then we must accept the findings of science and abandon those claims," he wrote in "The Universe in a Single Atom."

Lhadron, the nun, added, "Buddhists believe whatever reality is there, not just what such and such a text says."

While the Tibetan monastics come away from the program enriched, so do the Westerners. There is growing interest from the West about the relationship between the mind and body — for instance, the physical effects of meditation.

The science initiative also paves the way for Tibetan monastics to engage in future dialogue with Western scientists, another project fostered by the Dalai Lama in the form of annual conferences of the Mind and Life Institute that bring together Western researchers and monks in the United States and Dharamsala. "If monastics are not aware of scientific concepts, they can't communicate and collaborate," said Lobsang Negi, director of the Emory Tibet Science Initiative.

The program broadens the horizons of the Western science teachers, too, whether by teaching across cultures or thinking about science through the lens of ethics and human values as emphasized in Buddhism.

For Arri Eisen, a biology professor at Emory, teaching the monks and nuns helped him consider "how to nurture positive thinking. Western education doesn't nurture empathy."

Science may be far advanced in the West, but a moral vacuum exists, said Bryce Johnson, an environmental engineer who coordinates the Science for Monks program. "There's something lost in the West," Johnson said. The meeting of science and Buddhism is "a healthy exchange that is as much for the scientists."