Colombo, Sri Lanka -- Allegations of bribery and corruption have been levelled against former Chief Justice Sarath N. Silva in relation to his role in the formation of The Buddhist Broadcasting Services. 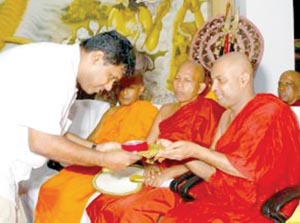 << Picture shows Muhunthan Canagey handing over the keys of the studio to Director of The Buddhist TV Channel, Ven. Daranagala Kusaladhamma Thero

The involvement of the main investor of The Buddhist channel launched by The Buddhist Broadcasting Services, Muhunthan Canagey in 2007 soon after Silva passed judgment on cases filed by him in the Supreme Court in 2006 has revealed a suspicious link between the duo.

The equipment and The Buddhist channel had been donated by former CEO of Dialog TV (then known as CBNsat), Canagey.

The set up of The Buddhist channel had cost Rs. 65 million (approximately US$ 600,000), which is stated as, “A kind gesture contribution by Muhunthan Canagey.” The act is also considered as “one of the largest contributions (charitable) by an individual in the recent past in Sri Lanka.”

Chief incumbent of the Sambodhi Vihara, Ven. Dharanagama Kusaladhamma Thero is the head of The Buddhist channel and Silva is an honorary director of the company.

The story behind Canagey’s generous contribution to set up the Buddhist channel begins after he enters into litigation following the banning of his DTH station, CBNsat, by the government due to security concerns.

The government in 2006 banned CBNsat for not possessing the necessary license for operations. However, the real reason for the ban was concerns on some of Canagey’s alleged links.

Equipment brought down by him for his operation was also held by the Telecommunications Regulatory Commission (TRC) at the Customs. Canagey first filed a case at the Supreme Court seeking interim relief to get the stalled equipment released.

However, the Supreme Court finally ordered that CBNsat facilities be sold to Dialog Telecom.

In 2007, Canagey decided to donate equipment and facilities amounting to Rs. 65 million initially purchased for CBNsat to establish The Buddhist channel.

Interestingly, Silva, who heard the cases filed by Canagey in 2006, is a director in The Buddhist channel launched in 2007.

Silva however has denied any link between himself and Canagey.

If as stated by the former Chief Justice, there was no connection between Canagey’s litigation and The Buddhist channel, then why Canagey chose to make such a massive

contribution to set up a TV channel in which Silva played a key role is a question that  begs answer.

A Hindu by birth, if Canagey had an interest in making a generous donation towards Buddhism in the country, he could have easily made it to one of the many Buddhist institutions in the country.

However, The Buddhist channel is now being operated in partnership with Dialog TV.

Another interesting fact is Silva’s designation in the company registration form of The Buddhist Broadcasting Services.

The registration form approved by the Company Registrar states that Director of the company, Sarath Nanda Silva residing at 18/171, Dabare Mawatha, Colombo 5 is a “social worker.”

The Buddhist Broadcasting Services Company was registered in March 2007 when Silva was the Chief Justice.

According to Silva, he claimed he is unaware of him being named as a “social worker” in the company registration.

Interestingly however, he has placed his signature in one of the documents where he has been referred to as a ‘Social Worker.’

A sitting Chief Justice cannot hold any other office, especially without the approval of the Executive.

Public interest groups are to now lobby for an investigation into the alleged bribery and corruption involved in the judgment delivered by Silva to transfer CBNsat facilities to Dialog Telecom and Canagey’s eventual involvement in setting up of The Buddhist channel.

Former Chief Justice Sarath N. Silva denied any knowledge of the donations made by Muhunthan Canagey to the value of Rs. 65 million to Ven. Dharanagama Kusaladhamma Thero to launch The Buddhist Broadcasting Services at the Sambodhi Vihara.

Silva told The Sunday Leader that he was not involved with the administration work of the TV station as he participated only in two programmes – one recorded by TNL TV and the other by Sirasa TV on Poya days.

“I only go for the programmes,” he said.

However, he remains an honorary director of the company.As for his designation being listed as a ‘social worker’ in the company registration form, he said that the person who handled the registration might have used the term.

“I am not aware of it. However, I did make a request that they do not write me as the Chief Justice. I was close to retiring at the time and this was a non profit organisation,” he said, adding that he would have therefore been named as a social worker.

When asked as to how Canagey came to make a donation to the value of Rs. 65 million in 2007 to the TV station after Silva heard the case filed by him in the Supreme Court in 2006, the former Chief Justice said there was no connection.

Also, when asked if the judgments delivered by him were favorable to Canagey, Silva said, “The judgments were actually against him. He filed a case seeking interim relief to get the equipment he had brought down for his station,

CBNsat, that were being held by the authorities after banning his station. Security authorities had concerns about Canagey and refused to release the equipment. Finally the government had agreed to allow the sale of the equipment to a state approved buyer.”

Silva added that Canagey subsequently filed another case seeking a license to operate his station, which was also denied by court.

Silva said that he did not visit the Sambodhi Vihara frequently and only participated in a few programmes.

----------------
Editor's Note: The Buddhist TV Channel, based in Sri Lanka is a satelite television broadcasting facility which should not be confused with the web based news portal BuddhistChannel.tv. These two media are not related.