COLOMBO, Sri Lanka -- Pakistan is developing the Gandhara Trail to attract Buddhist pilgrims from Sri Lanka and other parts of Asia and to demonstrate its interest in preserving and showcasing its non-Islamic heritage. 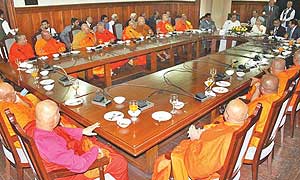 A delegation of 40 high-ranking Sri Lankan Buddhist monks and Buddhist scholars, led by Parliament Speaker Karu Jayasuriya and the Buddha Sasana and Justice Minister Wijeyadasa Rajapakshe, are now in Pakistan to visit various sites on the Gandhara Trail at the invitation of the Pakistan government.

Islamabad aims to introduce its rich Buddhist heritage, known as the Gan­dhara heritage, to the largely Buddhist Sri Lankans, and revive the Gandhara Trail, which was part of the ancient Silk Route linking China with Western Asia, a Paki­stan High Commission press release said.

The Sri Lankan delegation will visit Mardan, Takht-i-Bahi and Swat, apart from Lahore, Taxila and Peshawar museums, which are home to some of the rarest Buddhist relics. Gandhara is a triangular piece of land about 100 kilometres east to west, and 70 kilometres north to south, on the western side of the Indus River, surrounded by mountains.

Pakistan has been the cradle of Buddhist art and culture since time immemorial. The Gandhara civilisation flourished in the north-western region of Pakistan from the 6th Century BC to the 5th Century AD. The Gandhara School of Art is said to have created the present image of the Buddha. Carved in stone, stucco, terracotta and bronze, these images were enshrined in monasteries and stupas in the Gandhara region.