Effectiveness of preaching cannot be measured in decibels

Colombo, Sri Lanka -- Buddhism and the history of the Sri Lankan State are, as is well known, inseparable. Besides the spiritual guidance provided to the people, tremendous are the sacrifices that the Buddhist monks have made to protect this country they did not hesitate even to make the supreme sacrifice, especially during the colonial times to prevent the disintegration of the nation. So, they came to occupy a special place in the Sri Lankan society. 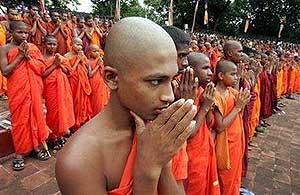 << The emergence of a plethora of social, economic and political institutions has led to a severe erosion of the authority of the Maha Sangha in modern Sri Lanka

However, the evolution of the modern State as a secular entity has taken its toll on the privileged position of the Maha Sangha vis-a-vis the emergence of a plethora of social, economic and political institutions. The development of these mundane institutions has led to a severe erosion of the authority of the Maha Sangha and the need has been felt to redefine their social position and authority in relation to the growing secularism of the State and the expansion of democratic institutions.

During the past few decades or so, a section of the Maha Sangha has adopted a radical approach to those challenges. In the recent past, some of them have even chosen to venture into mundane affairs like politics claiming that their intention is to make their active participation a catalyst for a positive change. A handful of monks have also sought to obtain driving licences and practise law and medicine in a bid to stretch the limits of their conventional role.

This process of radicalisation has brought the Sangha on a collision course with the established institutions, as we saw last Friday, when a group of Buddhist monks created an untoward situation in the Supreme Court (SC) over the arrest and the remanding of a monk alleged to have violated an SC ruling on noise pollution, for his failure to turn up in Court. The contention of the protesting monks was that their freedom to use loudspeakers for sermons should not be curbed. Speculation is rife that some monks may stage public protests.

If the good monks have any problems arising from the ruling at issue, the best place for them to be taken up is the SC. They might be able to obtain redress or have their doubts cleared, if they follow the proper process and procedure.

The judiciary is one of the pillars of democracy and if its authority were to be challenged and defied with impunity, then the very foundation of a democratic society would be threatened. The basic law of this country, while granting Buddhism the foremost place, states very specifically that everybody is equal before the law. It, therefore, goes without saying that when the apex court issues notice on someone, he or she has to comply forthwith or be prepared to face the consequences. If he or she were to be able to ignore such notice and get away with it, then the implication would be that he or she is above the law.

So, the Supreme Court had no alternative but to order that the monk concerned be remanded. Every right thinking person, we believe, is on the side of the learned judges who made that decision without letting a very bad precedent be created.

Buddhist monks, as was said earlier, have a privileged position in this society and deserve respect. But, it behoves them to avoid, in dealing with State institutions, situations that cause embarrassment and affront to the latter`s dignity and authority. They should have known better than to enter the Supreme Court and conduct themselves in such a way as to disregard the age-old norms and customs governing the affairs of the judiciary.

Their conduct on Friday, in our book, smacked of hubris and a misguided sense of respect for their social position. A court of law is not a place for protests religious or otherwise. It must be respected for the wellbeing of democracy. The Maha Nayake of Asgiriya Most Ven. Udugama Sri Buddharakkhitha Thera has rightly said that monks present in the Supreme Court should rise from their seats when the judges enter as a mark of respect for the judiciary.

Noise pollution has become a problem partially associated with the Buddhist Temple due to the concentration of some monks and their devotees on the mundane aspects of Buddhist practices rather than the essence of Buddhism, which needs to be realised through clear understanding or samma ditti and nothing else.

No amount of megaphone sermons is capable of helping people achieve that feat. The need is for the temple to attract more and more people and guide them on the correct path a without disturbing them by giving them an overdose of bana via loudspeakers. A sermon is best confined to a willing audience. To others, it may become a nuisance.

The Buddha wisely instructed the Sangha that a hungry man be given some food before Dhamma was imparted. Similarly, in the modern society, where man is overworked and lacks sleep and rest, most people are in no mood for late night or pre-dawn ear-splitting sermons relayed through loudspeakers. Most of all, as one of our readers tells us from the US in a letter carried on the opposite page today, there are children studying at night and early in the morning. They need peace of mind to pursue their studies. There are also the newborn, the aged, the tired and the sick who must not be disturbed at ungodly hours.

As for the mode of disseminating Dhamma, today`s monks only have to follow the Enlightened One. Nowhere has mention been made of any disturbance caused to the people around the temples where the Buddha lived and preached. Instead, we are told, monks residing at Jetavanaramaya were disturbed by the noises from Chundasukara`s piggery in an adjoining land.

Thus, it may be seen that the dissemination of Dhamma doesn`t have to be a noisy affair. Its effectiveness cannot be measured in decibels!