Iwate Prefecture, Japan -- It’s been a harrowing  few months for Japan’s disaster-hit northeast, but this week the residents of Iwate Prefecture were blessed with a rare piece of good news. 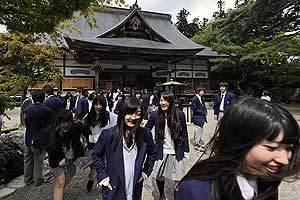 << European Pressphoto Agency
School students gather before the Main Hall at the Chuson-ji Temple in Hiraizumi, Iwate Prefecture in May.

The Paris-based U.N. Educational, Scientific and Culture Organization, or Unesco, on Sunday awarded World Heritage status to the Hiraizumi area in southern Iwate, the site of a 900-year old Buddhist temple called Chuson-ji that was built in an attempt to create a “Pure Land” of enlightenment on earth.

Construction of the temple, which sits in a peaceful cedar forest well away from the tsunami zone (though it still suffered some damage from the March 11 earthquake), was started in the early 12th century by warlord Fujiwara no Kiyohira after he renounced a life of battle in favor of the peaceful study of Buddhist scripture. And Chuson-ji’s chief priest said the temple’s founding mission resonates strongly with modern concerns about peace and the environment, something he thinks helped Hiraizumi to gain World Heritage status.

“The man who built the site participated in many conflicts that occurred at the time and saw his parents, wife and children killed by his enemies,” said Chief Priest Shunwa Yamada at a press conference in Tokyo on Wednesday. “After he gave up fighting and began studying Buddhism, he founded a temple to teach that all creatures should be allowed to live equally in nature, and that all living things have an obligation to nurture the lives of others.”

Hiraizumi also includes sub-temples, gardens and architectural sites; the remains of two centuries of political and cultural importance for the region under the rule of the Fujiwaras. At its peak in the 12th century, the population of the town was thought to be in the tens of thousands–today there are closer to 8,500 living there.

The governor of Iwate Prefecture, Takuya Tasso, said at the same press conference that he hopes World Heritage status for Hiraizumi will allow the prefecture to repay some of the international support it has received in the wake of the earthquake and tsunami on March 11, which left nearly 7,000 residents dead or missing. “We hope to receive many visitors from overseas and hold international conferences on peace and the environment,” he said.

Hiraizumi’s listing with Unesco–which helps governments and local residents safeguard their most valuable cultural and natural assets and promotes international cooperation on conservation—brings the total number of World Heritage sites in Japan to 16.