TOKYO, Japan -- Renjo Miura, a Buddhist priest of the Nichiren sect, made a 600-kilometer pilgrimage on foot, starting on June 18 last year, and finishing on August 1. 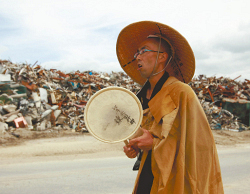 His purpose was to comfort the souls of those who died in last year’s earthquake and tsunami, where nearly 16,000 people perished, and more than 3,700 are still missing. He also helped to bring peace to the traumatized survivors as he made his way through the disaster zones.

“I walked north for 44 days along the Pacific coastline 100 days after the earthquake, through the devastated areas, and skirting the no-entry zone around the crippled Fukushima Daiichi nuclear power plant. Thirteen other Buddhist priests joined me at different sections on my route,” he said, speaking recently about his experiences.

Although Miura’s own home in the city of Sendai, Miyagi prefecture, was partially damaged by the earthquake, he decided to make the pilgrimage to help bring peace to the victims, and to learn first-hand about the disaster.

“By listening to the survivors’ experiences, we discovered just how horrific the tsunami had been,” Miura said. “Many people put their hands together when they saw us, and wept as they told us of their experiences.”

The priests conducted memorial services as they walked through the devastated areas in the Tohoku region, scattering papers with the phrase, “I take refuge in the Lotus” and throwing them into the ocean. In the course of his pilgrimage, Miura chanted 150 times, and wrote sutras on 20,000 pieces of paper.

“The first time we did this, it rained heavily,” Miura said. “But we didn’t stop praying and we kept chanting the sutra. When we finished praying and chanting, the rain suddenly stopped. We felt an invisible power and heard wishes and messages from the many people who had died in the area.”

On his journey, Miura picked up a piece of wood from the debris washed ashore near the Takata Matsubara Pine Forest, where 700,000 pine trees were destroyed by the tsunami. He wrote a passage from a Buddhist sutra on the wood and chanted for the souls buried under the debris while beating a drum.

Miura, who became a priest when he was 20, volunteered to listen to the victims at an evacuation center in city of Sendai, Miyagi prefecture, after the earthquake, as they said he was unknown to them. His pilgrimage was an attempt to remedy this situation by gaining a deeper understanding of the disaster and the losses associated with it.

Japan’s Yomiuri newspaper tells of Yoko Abe, who used to run a supermarket in Minami-Sanrikucho, Miyagi prefecture, and is one of the survivors for whom Miura chanted.

“I don’t think much progress has been made on restoration, but Miura’s chant encouraged me,” she told the Yomiuri. “It made me think that I’d like to help to people again. The next morning she presented rice balls to the priest, as a token of her gratitude.

At the end of his talk in Tokyo, Miura ended by stating his belief that the natural crisis and the nuclear problems in Japan provide us with opportunities to become better human beings and demonstrate our humanity and compassion toward others.