Wakayama, Japan -- One of the major tenets of Buddhism, the Four Noble Truths, is that desire causes suffering. Apparently that idea holds true whether one is personally afflicted with desire or not. 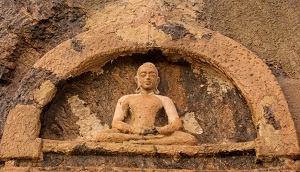 Buddhist shrines in Japan have long had a problem with tourists swiping potentially valuable statues of Buddha, with 105 reported thefts over a two-year period.

One way to remove desire is to simply remove the object of interest from one’s presence. In the case of the statues, the chief priest of a shrine in Jiangjin City has decided to replace a particularly valuable statue with a 3D printed duplicate. The original has been given over for protection to the Shimane Museum of Ancient Izumo.

“I had no option but to do so to protect the statue,” said Chisen Inoshita, 70, chief priest of Seitaiji temple in Jiangjin City. “People can visit to pray if the statue - though it is a replica - is there.”

The object in question is a 3-ft. tall Amitabha statue, thought to have been made during the Kamakura Period (1192-1333). The Jiangjin City shrine is one of many holy places that are generally left open for public use, but not actively manned by Buddhist priests. This has left them ripe for plundering by people who are more interested in acquiring a keepsake of their travels than in the spiritual value of such statues.

Students at Wakayama Technical High School came to the rescue, using a 3D scanner to create a digital copy of the statue, before proceeding to print out a duplicate to be placed on display. The replica is a full color copy of the original, and most visitors will probably never notice the difference. Any thefts of the replica can be easily replaced.

Creating 3D printed copies of the original statue has come with other benefits as well. The museum is able to keep a copy on hand that blind visitors are able to touch, giving them a more personal connection to the statue. Other projects in Japan have similarly used 3D printing to assist the blind.