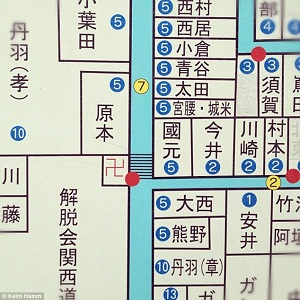 << Japanese tourism offices are starting to replace swastika symbols with drawings of pagodas to symbolise Buddhist temples on maps in the country as they confuse tourists, who associate them with the Nazis

But this practice could soon be abolished after a survey revealed that most tourists associate the symbols with Nazism.

The Sanskrit lettering, which the Japanese refer to as the 'manji', had been used as a sign for religious buildings for thousands of years before Hitler and his henchmen decided to adopt it as their own, after turning it backwards.

Because of the confusion it has created among visitors, the country's tourism department has started to change the way that they symbolise temples on a map by using a drawing of a pagoda instead.

They are also looking into changing the H symbol they use to mark the location of a hotel on a map, because in many other countries that symbol is used to indicate a hospital.

But many Japanese people are unhappy with the symbols being changed.

They believe it is a key piece of the country's history and argue that it shouldn't be put out of use simply because it confuses tourists.

Makoto Watanabe, a communications expert at Hokkaido Bunkyo University, told The Telegraph: 'We have been using this symbol for thousands of years before it was incorporated into the Nazi flag.

'I believe it would be better for us to keep it on our maps and ask others to understand its true meaning.

'I think it would serve a good purpose if people from abroad see the symbol, ask what it means and where it originated.'