SAKURAI, Nara Prefecture (Japan) -- A gigantic scroll containing a life-size picture of the main Buddhist statue of Hasedera temple here has been dusted off for the first display in six years. 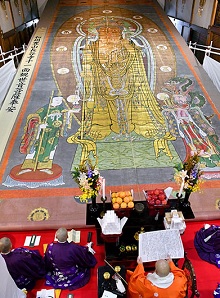 It is one of the longest scrolls in Japan at about 16.5 meters in length and 6.2 meters wide. It weighs a whopping 125.5 kilograms.

The scroll's main image is that of the 11-faced Kannon bodhisattva, and it is almost the same size as the statue itself.

About 20 priests rolled open the scroll and read a sutra at a ceremony to consecrate the scroll Feb. 27 prior to it being put on public view from March 1 to May 31.

It is said that the picture was originally drawn as a blueprint for rebuilding the main statue after it was destroyed by fire in 1495.

The drawing is attributed to an artist called Seiken, who lived in the Muromachi Period (1338-1573), and belonged to Kofukuji temple in Nara.

“We would like (the visitors) to observe the Buddhist statue and the scroll to see how big they are and how they differ from each other,” said Kenjin Igarashi, head of the temple office.

A special fee of 500 yen ($4.70) will be charged in addition to the admission cost for Hasedera temple.
TOP