NARA, Japan -- A Buddhist statue taken from the Horyuji Temple compound, a World Heritage site in the ancient capital of Nara, has been found in a car rented by a man who was arrested for stealing another statue from a different temple Sunday, police said Monday. 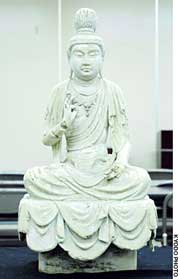 << News photo
A stolen Buddhist statue -- a replica of one made in 711 that is a national treasure kept at Horyuji Temple -- is shown Monday at a police station here after it was recovered.

The 74-cm-tall bodhisattva of wisdom was discovered missing from a chamber located west of the Western Precinct, which includes the temple's famed pagoda, Sunday with a section of the chamber's wooden lattice broken open.

The figure is a replica of a statue made in 711, which is a national treasure and is kept inside the pagoda, one of the oldest wooden structures at the temple, located in the town of Ikaruga.

The figure was found wrapped in a cloth on the back seat of a car rented by the man, identified as Kosuke Okuma, a 43-year-old owner of a nail salon in Asaka, Saitama Prefecture.

Okuma was arrested Sunday at Tachibana Temple in the town of Asuka, Nara Prefecture, during an alleged attempt to steal another statue.