Tokyo, Japan -- One of the most endearing and recurrent images of Japan, found on temple grounds, country roads and in cemeteries, is that of Jizo, the stone-carved, baby-faced monk. 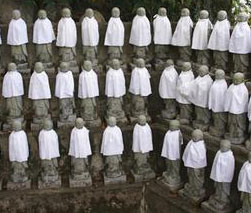 << Ordered ... rows of dressed statues, standing in a lotus base and one of the many shrines.
Photo: Maria Visconti

Sometimes he just carries a staff, but more often than not, he holds a babe-in-arms with two others climbing up his robes. In cemeteries, Jizo usually presides over clusters of mizuko dolls who wear crocheted hats over their bald stone heads.

Multiple Jizo stone images can also be seen in a chorus-like line-up, under protective awnings, wearing the ubiquitous cloth baby-bonnets or bibs according to the seasons. These garments are always pristine as they are carefully changed by volunteers who wash and iron them periodically.

Standing on a lotus base - symbolic of being released from the karmic cycle - and sporting a third eye and elongated ears, Jizo could easily be mistaken for an image of the Lord Buddha himself. But Jizo belongs to an army of "enlightened beings" called Bodhisattvas in the Buddhist tradition, who have refused to take their place in Nirvana until they have helped all others achieve salvation.

"Not until the hells are emptied will I become a Buddha," he is quoted as saying. Although they have earned the right to cease their never-ending cycle of suffering, these "saints" (as we might call them) remain behind to extend a hand to those in need.

Jizo is one of the most loved and venerated figures in Japan, having the express, self-imposed task of helping the souls of dead children. In the Japanese tradition, children's souls are seen to be in special need since they have not lived long enough to accumulate merit to cross the mythical Sanzu River to Heaven and have unwittingly caused grief to their parents (with their untimely deaths).

Jizo helps these infants' souls by hiding them up the sleeves of his robes protecting them from predatory devils and guiding them to salvation, away from eternally having to shift stones by the river bank in penance.

Each stone carved mizuko doll placed at Jizo's feet represents a child who has died before its parents - including stillborn babies and miscarried or aborted ones. Jizo's baby-like features are intended to resemble the children he protects.

The tradition of "clothing" Jizo figures has its origins in a cathartic gesture from grieving parents who provide the garments in a symbolic effort to protect their child from cold. This tradition is relatively new, believed to have started in the 1980s and it is associated by many sociologists with an upswing in the abortion curve and the correlating feelings of guilt and sorrow felt by the women involved.

Abortions are usually kept secret (or confined to a family unit) in most cultures and the mizuko rituals provide a venue for doing something physical to counteract any feelings of anxiety and self-recrimination engendered.

Toys are also sometimes placed in the shrines containing the simply carved mizuko dolls, not only by bereaved parents, but as an act of gratitude by those whose children have recovered from a serious illness.

When Jizo is not holding a babe-in-arms, he is shown carrying a wish-granting jewel in his left hand and a staff with six rings in his right hand called a shakujo. The staff has its antecedents in China where Buddhist priests would rattle them as they walked to alert small creatures (such as insects) to the impending danger of being trampled on.

The jingling of the staff also served to alert the faithful to the presence of a mendicant monk in need of alms. During religious ceremonies the abbot of a temple would also strike the ground three times with the staff to dispel ignorance. The six rings represent different realms of being such as that of humans, animals, hell, hungry ghosts, gods and jealous gods - an amalgamation of the varied cultures Buddhism has spanned as it spread from India to Japan.

The shakujo survives in other less compassionate spheres as well: from the Chinese martial arts novels - where the warring monks of the Shaolin temple use the staff as a weapon - to popular characters of the manga and anime world where the staff is used to cast spells or perform magic.

Travellers also claim Jizo as their protector to help them negotiate the perils of passage. Thus Japan's quiet country roads are littered with roadside shrines.

Firemen, too, are under his wing as they see their job as fighting the flames of hell to rescue and guide victims to safety.

Next time you are in Japan, look out for Jizo shrines, place yourself under his protection and spare a thought for all those souls he looks after.

Getting there: JAL flies to Japan daily see http://www.au.jal.com.

World Expeditions' Backroads of Japan trip takes an in-depth look at the country's ancient traditions in a combination of foot and rail travel. Further information http://www.worldexpeditions.com.au or phone 1300 720 000.