Inside the shogun's secret fortress

KYOTO, Japan -- The magnificent buildings and peaceful atmosphere of Kyoto's 800-year-old Chionin temple attract visitors year-round, but few are aware that they may have once been used to disguise the Buddhist temple's true role as a hidden military fortress. 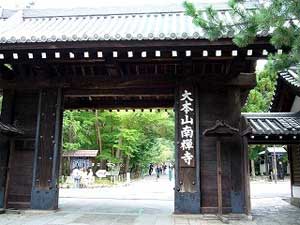 Some scholars believe the Tokugawa shogunate used Chionin, which stands on a foothill of a mountain in Higashiyama Ward, Kyoto, as a key strategic base during the Edo period (1603-1867), building new structures and strengthening existing ones to create a secret stronghold.

The shogunate's close connection with the temple, which is near Kyoto's Gion entertainment district, remains in clear evidence today. The family crest can be seen on monks' garments and on roof tiles of the buildings, many of which are national treasures or important cultural assets. Some believe, however, that military use is also a big part of the temple's history.

Renowned novelist Jiro Asada discussed evidence for such a theory in a recent interview with The Daily Yomiuri.

"I'm sure the temple served as the shogunate's military fortress," said Asada, who served in the Ground Self-Defense Force in his youth. "Fear of attack may have spurred the transformation of the temple. The shogunate was concerned about the possibility of a mighty feudal lord fighting them with the backing of the court."

Chionin temple was founded in 1234 near the mausoleum of Honen (1133-1212), the founder of the Jodo sect of Buddhism. In his lifetime, Honen had been persecuted by the Buddhist establishment for his belief that redemption could be attained by any person who repeatedly chanted the nenbutsu prayer, a teaching that was well-received by commoners. Today, Chionin is sometimes referred to as the Temple of Honen.

By the late 16th century, due in part to the backing of the Imperial court, the temple had acquired great status as the headquarters of the Jodo sect, but the beginning of the Edo period brought an important change for Chionin, as it was officially declared to be the shogunate's family temple.

The temple received massive financial support for the construction and reconstruction of its buildings from the shogunate.

Tokugawa Ieyasu, the first shogun, was an enthusiastic devotee of the Jodo sect, his family having joined the sect six generations earlier, and one ancestor having served as the temple's head priest. Ieyasu himself reportedly hand-copied the nenbutsu prayer every day on a small piece of paper, but Asada argues the shogun's Buddhist faith was not his primary reason for sponsoring the temple.

"Ieyasu's priorities were military, more than religious," Asada said. "Tokugawa shoguns in the early Edo period had the mentality of military chieftains.

"The temple was located on a hilly site, ideal from a military point of view," he added, explaining the twofold advantage of having cannons positioned on the hill and using the hard-to-negotiate geography as a form of defense.

An imposing 24-meter-high, 50-meter-wide Sanmon gate in front of Chionin, constructed by the second shogun, Tokugawa Hidetada, also hints at a military design. In spring and autumn, visitors can enter the two-storied structure, now a designated national treasure, and explore its balconies and elaborately decorated Buddhist hall.

Two statues in the hall are of particular interest. One depicts the master builder who oversaw the construction of the gate, and the other depicts his wife. According to legend, the couple committed double suicide to accept responsibility for the gate being built over budget. But rivaling this argument is the theory they were executed because the master builder knew too much about the structure's secret purpose.

"The gate did act as a symbol of the shogunate's power, but the thing about it that really makes an impression is the bird's-eye view of the ancient capital [from its balconies]," Asada said. "I'm convinced the gate was used as a watchtower."

Indeed, from the gate's balconies one could see both the Kyoto Imperial Palace and Nijo Castle, the shogunate's official base in the city, on the level ground of the ancient capital far below.

The vulnerable, low-lying position of Nijo Castle, which is listed today as a World Heritage site, would have made it unsuitable as a fortress, Asada said, suggesting the shogunate had good cause to use Chionin temple as a center for its warriors.

Moving past the gate and toward the 105 other structures that fill the temple's 24-hectare site, visitors arrive at two large stone stairways that lead to the temple's main precinct. The longer of the two, "nyoninzaka" (slope for women), has a gentle incline, while the much wider "otokozaka" (slope for men) provides a direct but very steep route.

The imposing grandeur of otokozaka was magnificently rendered in the 2003 film "The Last Samurai" in a scene where the character played by Tom Cruise climbs the stairs en route to a meeting with the emperor.

According to Asada, nyoninzaka was meant for transporting military supplies (despite their names, use of the stairways was not based on gender), and otokozaka was designed to ensure samurai soldiers could be mobilized quickly during battle.

Visitors can find plenty more evidence elsewhere in the main precinct to support the fortress theory.

The Mieido main hall, which is also a national treasure and contains a wooden statue of Honen said to have been carved by Honen himself, can accommodate 2,000 people. There is no question in Asada's mind that it was designed to be used as barracks for the shogunate's army.

A long roofed passage connecting the hall to other buildings is dubbed the "Corridor of Bush Warblers" because the squeaking floorboards sound exactly like the birds' distinctive singing, no matter how light one's step. The corridor, which Albert Einstein found particularly delightful when he visited in 1922, is one of the "Seven Wonders of Chionin," along with a sliding door bearing traces of the image of a sparrow, which is said to have flown away.

Each of the seven wonders is associated with a colorful, amusing anecdote or legend, and Asada believes these tales were created purely to divert focus from the shogunate's military purpose at Chionin.

Commenting on the fact that a prince was sent from the court to serve as the temple's head priest in the early Edo period, Asada said, "I think he was taken as a hostage of the shogunate."

Despite the abundant evidence suggesting Chionin was designed and fully prepared to become a wartime stronghold, at no stage during the Edo period or afterward did conditions require it to serve that function. However, it was used as a military camp by feudal lord Oda Nobunaga (1534-1582) against the Muromachi shogunate in 1573.

"There are many layers to Chionin that reveal the intricacies of history. It's an interesting temple," Asada said.

Today, the temple maintains as its core the teachings of Honen, for whom it was established.

Honen entered the priesthood at Enryakuji temple on Mt. Hiei, in present-day Shiga Prefecture, the headquarters of the Tendai sect, when he was 13 years old.

At age 43, doubting the prevailing Buddhist teachings that favored the elite classes, Honen left the temple to spread his own teachings from a base near what would become the site of Chionin.

Strongly believing that all people, not just the rich and powerful, should benefit from worship, he entreated every person he met to commit to chanting the nenbutsu prayer every day. His teachings soon became popular, both among commoners and elites.

Established Buddhist circles began persecuting Honen and his followers, and at age 75, he was banished to Shikoku. He was later permitted to return to Kyoto, but the persecution of his teachings continued even after his death.

Kanda says that Chionin visitors who wish to feel Honen's spirit should walk beyond the main precinct to a quiet, uphill area where his mausoleum can be found.

The Jodo sect now has 6 million devotees at 7,000 affiliated temples across the nation, and various events at Chionin raise its profile even further.

At "Midnight Nenbutsu" in April, an all-night event, people gather in the hall of the Sanmon gate to chant the nenbutsu without break until dawn among the Buddhist statues dimly illuminated by candles. About 850 people participated this year, more than double 2007's attendance.

Ringing the mammoth bell requires the physical participation of 17 priests: 16 of them raise a giant wooden hammer by pulling on ropes, swinging it away from the bell, while a colleague hangs from the striking end of the hammer, ready to push with his legs in the split-second before the hammer's impact. The deep chime of the bell continues for 20 minutes, and the scene is often shown live on television during New Year's eve broadcasts.

During his 1922 visit, Einstein also showed an interest in the bell. He had heard its tone was inaudible to a person standing directly underneath it, and after conducting an experiment, he found the rumor was based on accurate physics.

The temple also hosts early morning sermons every day at Mieido hall and bimonthly events where Buddhist scriptures are copied by hand. In a concession to the modern age, it is also possible to listen to sermons at the temple's Internet site.

Chionin will mark the 800th anniversary of Honen's death in 2011 with a series of major events over a monthlong celebration from March 27.

"It's an important event for the entire sect, as all affiliates across the nation are also scheduled to host events thanking Honen-sama," Kanda said.

Chionin temple is about a five-minute walk from Higashiyama subway station.