Kyoto, Japan -- The ancient Zen gardens of Kyoto, the Japanese city made famous for a landmark treaty on tackling climate change, are dying because of global warming. 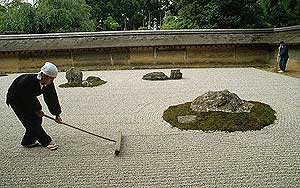 A new study has found that a delicate moss, which gives temple grounds their distinctive air of mellow tranquillity, is in rapid decline because of warmer weather and changing rainfall.

The research, carried out by Kyoto University, showed that moss had diminished in nine of the city's 13 Buddhist temples and Shinto shrines.

One of those affected is Ryoan-ji, the world's most famous Zen garden, where more than a hundred different types of moss sit together in elaborate harmony.

The Kyoto treaty was signed in 1997 and called on industrial nations to reduce the polluting carbon dioxide emissions that fuel global warming.

However, while 181 countries have signed up to the protocol, its aim to stabilise greenhouse gas emissions still looks far from becoming a reality.

In Kyoto, the Buddhist monks have grown so worried by the changing climate's damaging effect on the gardens that they have taken to watering their gardens manually, rather than relying on rain and dew.

They are even resorting to importing more resilient varieties of moss from Tokyo - in an embarrassing concession of tradition to the painful new realities of global warming.