A dose of Zen

Tokyo, Japan -- MONK-like, the tourists hasten away from their hotels at dawn wrapped in thin cotton robes called yukatas. On their feet are bathing slippers, and in their hands little baskets with the essentials. 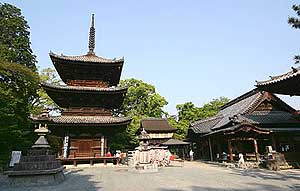 Each hotel has its own yukata style, some crazily patterned, others in subdued colours. Their wearers look like members of opposing teams. They all have a single destination, though:  in the city of Matsuyama on the island of Shikoku.

Built in 1894, the Dogo Onsen communal bathhouse is a three-storied wooden building with magnificently curved roofs. All day long, visitors stand in clusters at the entrance, photograph themselves and queue for admission tickets.

Understanding how the ­bathhouse system works is no simple task for ­outsiders. The staff speak little ­English, so communication is with hands and eyes.

But this ought not deter tourists from visiting a bathhouse at an onsen – the Japanese word for a natural hot spring – which is a must during a stay in Japan.

Onsen baths are among the standard appointments of ryokans, traditional Japanese inns, which fit the stereotypical image that ­foreigners have of Japan. The rooms have floors covered with tatami mats woven of rice straw, and taking off your shoes is de rigueur. A low table occupies the middle of the room, surrounded by chairs with cushioned seats. Doors made of rice paper separate the ­various areas. All told, the space is plain and bright.

Amid the elegant tidiness, first-time guests wonder where in ­heaven’s name the bed is hidden. But they need not fear having to sleep on the scratchy mats. By evening, as if by magic, a futon lies invitingly on the floor.

The Japanese love of detail and the decorative arts is also on display in a ryokan’s guest room. And the staff are exquisitely polite despite the constant difficulties in ­communication.

Onsen baths take many forms. They can be small and narrow or generous in scale, shabby or elegant, blessed with intoxicating views of nature or enclosed by walls.

In most of them, women and men bathe separately. The water temperature is at least 40°C and it is imperative to wash thoroughly before entering the bath.

It is surrounded for this purpose by wash stations with mirrors, where you sit on a stool that seems made for children and can furtively observe what the locals are up to.

What the locals do is scrub ­themselves from head to toe as if trying to rub the last bit of colour from their bodies. They wash their faces and their hair. They devote themselves to every body part, no matter how small, as if they had all the time in the world. 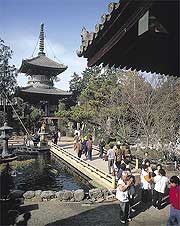 Finally, after a good while, they climb into the water and sit down, often in groups. This is the Japanese version of a tea party.

In the evening, Dogo Onsen ­overflows with humanity ranging from small children to old folk. It is so loud that relaxing is ­impossible. ­Other baths are divinely quiet, though. Especially lovely onsen baths have an adjoining outdoor area (bottom), allowing guests to watch ­bamboo trees sway in the wind ­during their bath, and to cool off in the fresh air afterward.

It is fairly rare to encounter other foreigners at an onsen. The ­Japanese eye foreigners with as much ­curiosity as foreigners do them, of course. This is something you must simply put up with.

After bathing, everyone slips back into a yukata. In many ­establishments, guests are served green tea and delicate pastries.

Onsen baths not only boost one’s emotional and spiritual well-being, they are said to be curative as well. There are special springs for various ailments, and people journey to them like pilgrims.

Matsuyama also sees plenty of real pilgrims. Situated on the west coast of Shikoku, it lies on a pilgrim route comprising 88 Buddhist temples. The Shikoku pilgrimage is Japan’s most famous one.

Eight of the temples are in Matsuyama, including the Ishiteji Temple (top), about a 15-minute walk from Dogo Onsen. Built in 728AD, the temple features a three-tiered pagoda in the centre of the grounds.

The pilgrims are easily ­recognisable by their snow-white clothing, conical bamboo hats, ­walking sticks and hand bells. Red temple seals are applied to their white coats to certify their visit.

The pilgrimage route is about 1,100km long. Pilgrims who have visited all 88 temples are said to be absolved of sin and able to die with a cleansed soul. Few attempt to ­complete the arduous pilgrimage on foot. Modern pilgrims prefer to ride from temple to temple in air-conditioned tour buses.

For even less energetic pilgrims, Ishiteji Temple has brightly coloured bags of sand taken from each of the 88 temples. Touching all of the bags fervently is a vicarious Shikoku pilgrimage.

A temple visit is as ­relaxing as an onsen bath. You can ­quietly observe the rituals of the pilgrims, who usually ­approach in groups. Or you can simply wander about, take in the ­Buddha statues and stroll over small bridges into secluded nooks. The temple’s sanctity ­communicates itself ­immediately, even if you do not understand ­everything. The atmosphere is as bright and clear as the pilgrims’ clothing, and the visitor truly feels serene.

Perhaps the loveliest place to go in Matsuyama, however, is the castle on the hill (above).
You can proceed on foot but that would deprive your ­inner child of the pleasure of leisurely swinging up to it in a ­chairlift, and then, naturally, back down again. The ride not only provides a ­wonderful view but also a marvellous feeling of high-spirited weightlessness.

Situated atop 132-metre-high Katsuyama Hill, the castle was commissioned in 1606 by warlord Yoshiakira Katoh and completed 24 years later. Wars and fires ravaged it several times, and each time it was rebuilt to look like the original.

The spacious grounds afford the opportunity for extensive tours, and the castle’s clean lines and elaborate woodworking are impressive.

People who climb to the top floor of the castle tower can enjoy a panoramic view of the Matsuyama – including the Ferris wheel in front of the city’s main train station.

You can take a short cut back to Dogo Onsen in an old-fashioned streetcar that clatters its way to the station, which is not far from the bathhouse. A fountain beckons just around the corner from the station. The therapeutic effects of its hot water attract the ailing and healthy alike.

The same people can be seen dipping their hands and feet into the fountain several times before: in the bathhouse, in one of the outlying temples and in the lively shopping arcade. After all, many ways lead to bliss in Matsuyama.