Buddhism and borders in South Korea

A stay in a remote temple where monks perform both martial arts and meditation was a good way to get your head around the dividing line between communism and capitalism, writes TADHG PEAVOY

Seoul, South Korea -- SUCH IS THE diversity of South Korea that in the space of five days I found myself bear-walking backwards up a mountain with a monk for company and 73 metres underground on the border of the Cold War. 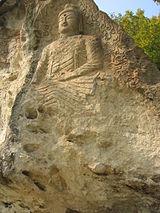 After a few days in Seoul, the capital of South Korea, I needed to get out of the urban jungle. A Korean friend booked me a temple stay at one of the country’s Buddhist centres and I was sent packing.

As I clambered aboard the ultra-modern KTX train, I sank a black coffee and ate traditional Korean rice sweets. These caffeine and sugary treats were to be my last for a few days, as I knew I would have to survive on a monk’s diet for my stay at Golgulsa Temple.

Speeding along, the scenery changed from the concrete and neon of the capital to lush rice paddies. After 90 minutes, the KTX pulled in to Gyeongju and I caught a bus though Gyeongju National Park. Forty minutes later the bus dropped me off at a quiet crossroads called Andongsamgeo-ri. I hauled my rucksack onto my back and walked the last kilometre to the temple.

A sign with a picture of a monk performing a flying kick informed me that this temple stay involved martial arts just as much as meditation. My friend had neglected to tell me that Golgulsa is the home of sunmudo: a combination of yoga, meditation and taekwondo.

I checked into my room and slipped into the monk’s robes that are given to all visitors, and then headed for my first temple dinner. Rice and vegetables, washed down with bean-sprout soup was to be breakfast, lunch and dinner. Evenings started with bowing and chanting at 7pm. This involved a ritual of Buddhist chants combined with up to 50 bows. Bear in mind that the bows take one from full standing position to kneeling and you get an idea of the physicality of the experience.

Next it was time for sunmudo training. On most days this involved kicking and patterns of movement, but on the first evening the monk in charge explained that we would be training outside.

Our mentor made the group run 2km downhill to the gates of the temple and back up. Following that we bear-walked – walked on all fours – up the next stage of the mountain for about 100 metres. The sun had gone down and I couldn’t see the gravel that had gotten stuck into the palms of my hands. Halfway up the incline the monk bear-walked past me and whispered: “I am not man, I am bear”.

After I had regained my breath, the monk told us to perform the same walk for the next 100 metres uphill – only this time we had to do it backwards.

At the top, we were told to sprint up a steep set of stairs to a Buddhist grotto.

Following training, we meditated. I eased myself into the half-lotus position, glanced out over the forest and closed my eyes. The relief after my exertions was powerful.

Temple life began at 4am, with a meditation on the same mountain. However, in the mornings the sun broke past the trees and cast a warm glow. The group then performed a walking meditation – focusing on breathing and walking silently down the mountain. After breakfast it was back to training.

At 11am it was green-tea break and a chance for visitors to introduce themselves. The tea was refreshing, but as one Scottish woman remarked: “I would have killed for a wee slice of cake with that”.

After more veggies and rice, there was either an archery session or another meditation.

On my last day, I hiked up the final climb of the mountain. This brought me along a ledge with a steep and fatal drop below. As I rounded the final bend a four-metre Buddha carved into the rock appeared before me. Saint Kwang Yoo and his fellow Buddhist monks, who had travelled from India to Korea in the sixth century, created the carving. It brought home that the rituals these monks go through every day are an ancient practice and that the opportunity to train in their home offered a unique insight into their lives and the lives of their predecessors.