Xi'an, China -- Buddhist monks in central China are up in arms over government plans to demolish large sections of a Tang dynasty temple along the ancient Silk Road. 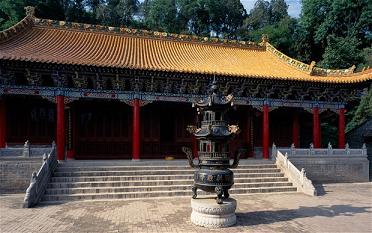 Local officials reportedly want to bulldoze nearly two-thirds of the Xingjiao temple complex in Xi'an, apparently in order to restore the sanctuary to its original style.

The revamp is part of a campaign to achieve UNESCO World Heritage site status.

"Some buildings will be demolished because it would make the environment more elegant," Zhang Ning, the head of the local Ethnic and Religious Affairs Bureau, told the Southern Metropolis Daily newspaper this week. A report in the Shanghai Daily newspaper claimed the buildings would be "rebuilt with a new and prettier look."

But the proposal has left local monks and Chinese micro-bloggers aghast.

The 1,300 year-old temple is home to three towers, one of which contains the remains of Xuanzang, a 7th century Buddhist monk revered for undertaking a 17-year pilgrimage to India.

While those towers will not be affected, many of the surrounding buildings have been slated for demolition by May. Some of those constructions date from between 1644 and 1911, according to the China Daily newspaper.

Local monks, who will be rehoused following the demolition, have vowed to fight the plans.

"If there was no demolition, we would support the world heritage application. But if the plan includes demolition, we shall quit," a local monk, Kuan Chi, told a meeting this week, according to the Southern Metropolis Daily.

Huang Chunbo, a micro-blogger, wrote: "I can't understand why you would destroy a cultural relic in order to apply for cultural heritage [status]. Isn't protection the point of the application?"