Shaanxi, China -- Hundreds of the world's Buddhists gathered at an ancient temple in northwest China's Shaanxi Province on October 16 to mark the opening of the World Fellowship of Buddhists 27th general conference. 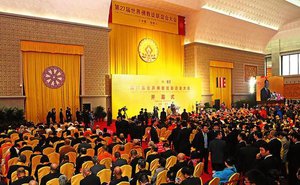 << Hundreds of the world's Buddhists gathered at an ancient temple in northwest China's Shaanxi Province on October 16 to mark the opening of the World Fellowship of Buddhists 27th general conference. [Xinhua/Song Hongmei&Mu Jialiang]

Congregating around a relic containing one of Buddha's finger bones at the Famen Temple in Baoji City, more than 600 representatives from 30 nations and regions are in attendance.

This is the first time the Bangkok-headquartered WFB has held its general conference in the Chinese mainland. The opening ceremony focused on goodwill and charity.

Master Chuanyin, president of the Buddhist Association of China (BAC), said the event is a milestone for friendship between the BAC and the WFB.

It will help Chinese Buddhists play a bigger role internationally, he said.

He hoped the event will boost Buddhists' cooperation and exchange on promoting Buddhism so as to make greater contributions to the benefit of mankind and world peace.

According to the WFB, the last conference was held in Yeosu city in the Republic of Korea on June, 2012.

Mochida said through the current and previous events he has strongly felt the "deepening relationship between Buddhists in northeastern Asia and south Asia," and he has "come to think that all the Buddhist believers in the world are going to the way of great solidarity."

The event has been organized by the WFB and jointly sponsored by the Buddhist Association of China and Shaanxi Province.

Founded in Sri Lanka in 1950, the WFB has aimed to promote strict observance and practice of the teachings of the Buddha, secure unity and brotherhood amongst Buddhists, and organize all sorts of humanitarian activities.