In China, the state decides who can come back from the dead

Beijing, China -- In China, it's not easy to become a “living Buddha.” First come the years of meditation and discipline. Then comes the bureaucracy. 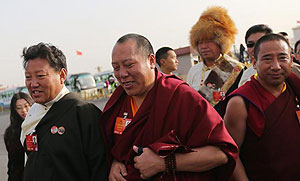 << Delegates from China's Tibet autonomous region arrive before the opening of the fourth Session of the 12th National People's Congress at the Great Hall of the People in Beijing on March 5, 2016. (Wu Hong / European Pressphoto Agency)

China is laying down the law on reincarnation, as Tenzin Gyatso, the 14th Dalai Lama — Tibet’s enormously influential spiritual leader — enters his twilight years with no successor in sight. Although the ruling Communist Party is an officially atheist organization – officials are barred from practicing religion – it is perennially uncomfortable with forces outside of its control, and has for years demanded the power to regulate the supernatural affairs of Tibetan Buddhist figures, determining who can and cannot be reincarnated.
Tibetan chairman

The Dalai Lama, 80, fled the Himalayan region in 1959 after a failed uprising; Chinese authorities revile him as a “separatist,” although he claims to only want increased autonomy for the region.

Authorities have framed their bureaucratization of the afterlife as a bulwark against fraudulent, profiteering monks. Yet experts say it's also part of a wide-ranging effort to tighten control over the turbulent region.

“From the point of view of Beijing, the whole apparatus seems to be about giving Beijing control over the appointment of the next Dalai Lama,” said Robbie Barnett, director of the Modern Tibet Studies Program at Columbia University. The Chinese term huofo, or living Buddha, refers to high-ranking religious figures in Tibetan Buddhism, but it has no true equivalent in the Tibetan language.

“They want to make sure they control the next Dalai Lama, as they’ve tried to control the current Panchen Lama,” Barnett continued, referring to the second-ranking leader of the Gelug school of Tibetan Buddhism. “We think we know about Communist policies [in Tibet], but they’re not what they appear. Communist policy on religion is: You run Tibet by … having a lama who is credible enough to be influential when he says you should follow the Communist Party. They don’t have enough power to control Tibet without a lama to handle it.”

At the meeting — held at the Great Hall of the People in Beijing, the country’s most prestigious venue — Phurbu Tsering, wearing red monk’s robes, spoke softly in Tibetan, while another delegate to the legislature translated into Mandarin.

He recited several points from the State Religious Affairs Bureau Order No. 5, a law that authorities passed in 2007 to govern reincarnation. One must have “recognition from the religious world and the temple” to reincarnate, he said.

The law itself frames reincarnation in terms of national security: “The selection of reincarnates must preserve national unity and solidarity of all ethnic groups, and the selection process cannot be influenced by any group or individual from outside the country,” it says.

“Fake living Buddhas” have been in the headlines since November, when a video went viral of Zhang Tielin, a Chinese-born British actor, being “ordained” as a living Buddha at a lavish ceremony in Hong Kong. The ceremony’s host, Baima Aose, a Chinese man from southeast China’s Fujian province, claimed that he had been certified as a living Buddha by a famous Tibetan Buddhist monastery. The monastery later denied ordaining him, and Aose issued a public apology.

On Jan. 18, authorities published online an official registry of 870 licensed living Buddhas, searchable by name, temple and identity card number or “living-Buddha card number,” to cut down on fraud.

Yet experts say that the system of registering living Buddhas has itself become fertile ground for corruption.

“The thing [authorities] are emphasizing is the database — that’s the new hyped up thing,” said Barnett. “The way it works is permits. You get a permit from the local religious affairs office, saying you’re recognized as a so-called living Buddha. Once you have that system, it means you can pay for it.

“Apparently what that means — and I have several personal sources on this — is that each area has a quota of these to hand out, and the officials in each area just sell their quota,” he continued.

The Dalai Lama, in a 2011 statement, called the country’s reincarnation laws “outrageous” and “disgraceful.”

“The enforcement of various inappropriate methods for recognizing reincarnations to eradicate our unique Tibetan cultural traditions is doing damage that will be difficult to repair,” he said.
Tibet

More than 140 people in Tibet and neighboring provinces have burned themselves to death since 2009 as a grim protest against Chinese rule; many have called for the Dalai Lama’s return as they went up in flames. On Feb. 29, an 18-year-old Tibetan died after lighting himself on fire, marking the first self-immolation since August, according to the London-based advocacy group Free Tibet.

Chinese authorities have repeatedly blamed the “Dalai clique” and other “hostile foreign forces” for the rash of self-immolations.

Authorities closed Tibet to foreign visitors beginning Feb. 25, and will probably keep it off-limits until the end of March — an annual occurrence since riots rippled across the region in March 2008. They have not extended the same restrictions to domestic Chinese tourists.

At Monday’s meeting, Baima Chilin, deputy Communist Party chief of the region, said that the Dalai Lama was “no longer a religious leader” after he left Tibet in 1959.

“If the Dalai Lama wants to return to China, he must give up 'Tibet independence,' and must publicly acknowledge Tibet and Taiwan are inseparable parts of China and that the People's Republic of China is the only legitimate government,” he said.

------------
Chuan Xu and Yingzhi Yang in The Times’ Beijing bureau contributed to this report.