Sichuan, China -- A Tibetan monk in China's Sichuan province is facing up to eight years in jail for allegedly painting separatist slogans on government property and circulating pro-independence posters. 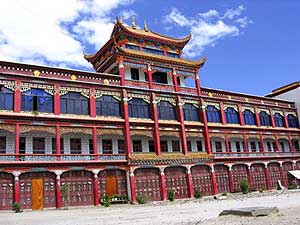 A Tibetan monk in China's southwestern Sichuan province is facing up to eight years in jail for allegedly painting separatist slogans on government property and circulating pro-independence posters, according to sources in the region.

The monk was identified as Namkha Gyaltsen, from the Gyasoktsang family in Thinley Lado village, in Ganzi (in Tibetan, Kardze), the sources told RFA's Tibetan service.

He is one of four master chanters at the Ganzi monastery, said the sources, who asked not to be named.

He allegedly painted pro-independence slogans on the walls of government buildings in Ganzi and on two ironbridges nearby in March this year.

Fearing arrest, one source said, "he ran away from Ganzi to escape to India via Lhasa," the Tibetan regional capital, but police pursued him to Lhasa, detained him, and returned him to Ganzi.

He was arrested at a bridge between Sakya (in Chinese, Saja) and Shigatse (Rigeze), the sources said.

Another source said Namkha Gyaltsen was arrested for putting up posters advocating Tibetan independence and displaying a Tibetan national flag."Since the Chinese authorities knew about his activities, he had no choice but to confess his actions after his arrest.

"According to local Chinese security officials, he is facing a sentence of seven to eight years," the source said, adding that he was said to be held in Ngaba (Aba). Tensions between Tibetans and Chinese authorities flare periodically in Ganzi Tibetan Autonomous Prefecture.

Ganzi monstery houses about 500 monks of the Gelupka or "yellow hat" Tibetan Buddhist sect, to which the Dalai Lama also belongs.Tibet has been ruled by China since People's Liberation Army troops annexed the region in 1950.The Dalai Lama, the region’s spiritual leader, fled to India in 1959 after a Tibetan uprising failed. He then established a government-in-exile in Dharamsala, northern India. Images of or writings by the Dalai Lama are banned, and Chinese authorities punish anyone found in possession of them or believed to oppose Chinese rule.

Chinese authorities at the Ganzi police bureau and detention center, contacted by telephone, denied holding or charging Namkha Gyaltsen. "We have no one by the name of Namkha detained in Ganzi," said one.