Shanghai, China -- Piety and a knowledge of Buddhist scriptures used to be just about the only qualifications needed to become a Chinese monk. Now computer skills, foreign language ability and a degree in financial management are also desirable. 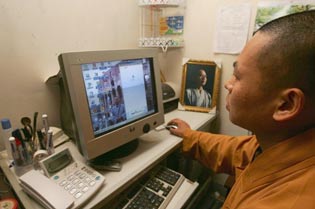 << A monk at China's Shaolin Temple, which helps produce computer games, logs on to the internet.
Picture: Cancan Chu/Getty Images

Three decades after temples were destroyed and scriptures burned during the Cultural Revolution, Buddhism is making a comeback in China. And, like most things in the super-competitive, rapidly developing country, it has become both big business and a field in which people are eager to get ahead.

Fifteen monks from his temple have been on foreign language courses at the Shanghai International Studies University, and another batch have started MBA studies in Jiaotong's business school.

Such skills are necessary, Mr Hui believes, for the temple to spread Buddhist teachings in the modern world and to manage its growing business interests. As well as its grounds, Jade Buddha owns a vegetarian restaurant, a four-star hotel, a seven-floor office building and a food factory.

Many of China's temples have been little touched by time, especially in remote areas of the country. But Jade Buddha Temple's modern approach is no longer unusual.

Buddhism, introduced into China in about the first century, is the biggest religion in the country, with as many as 100 million adherents - that's more than 8 per cent of the Chinese population - according to some estimates.

The persecution of the Cultural Revolution is long gone and, while the government is not very enthusiastic about any religion, in recent decades it has given more support to Buddhism than other faiths.

The ancient Shaolin Temple in Henan province has capitalised on its reputation as a birthplace of the martial arts to host international guests and stage kung fu displays around the world.

It owns a martial arts training school and Shaolin Development, a company producing vegetarian snacks and Zen tea. It also co-operates with entertainment companies in film-making and online game production.

The internet is also important for Mr Hui at Jade Buddha Temple. "The first thing in my daily work is to open the laptop to check e-mails and surf the internet," he said. "Everything in the temple is now processed online. No paperwork. Those who failed to pass the computer test were laid off and reassigned to non- office jobs."

Surfing the internet may seem a dangerous activity for people who are meant to be sequestering themselves from the world for spiritual contemplation. But Mr Hui has thought of that.

"Only certain people, such as we managers and those in charge of public relations, can get access to the internet. Others can only use the local area network, because it is hard to control what they will read on the internet," he said.

Mr Hui concedes that the lifestyle of a modern monk does not always permit much focus on the spiritual realm. "Interacting with the outside world occupies most of our time, so many monks have to use the noon break if they want to do meditation," he said.

But overall, he does not regret the change. "Before, everyone, including the abbot, had to clean the temple, and old monks were assigned to check tickets and guard the temple," he said. "But they often smoked and fell asleep, causing bad influences. Now, we have hired professional service companies to be responsible for temple security and cleaning. This works very well."