HONG KONG, China -- Something was strange about a little brown bird found dead with bird flu this month in one of Hong Kong's busiest shopping districts. 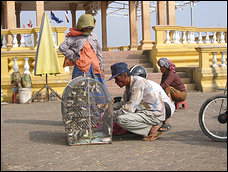 The bird — a scaly breasted munia — usually lives in rural areas. So what was it and five others doing flitting around in such a bustling, crowded area — possibly exposing some of the thousands of locals and tourists to the deadly virus?

Experts think the bird may have been a prop in a Buddhist ritual that involves freeing hundreds of birds to improve one's karma. As the threat of bird flu re-emerges in Asia, the government finds itself in the awkward position of urging that the religious practice be stopped to protect the public's health.

Hong Kong is extremely alert about potential disease outbreaks — especially bird flu. The illness first appeared here in 1997 when it jumped to humans and killed six people. That prompted the government to slaughter the entire poultry population of about 1.5 million birds.

Since then, the disease has largely spared this city of 6.9 million people.

When health officials discovered that the scaly breast munia — found on New Year's Eve — tested positive for the H5 virus, they held a televised news conference. A few days later, they said further tests showed the bird had the deadly H5N1 strain.

The scaly breasted munia is native to Hong Kong, but it's usually found in tussocks in rural areas, said Lew Young, a manager at the Chinese territory's Mai Po bird sanctuary.

"Six scaly breasted munia being found dead at the same spot at one time easily leads one to suspect whether they were being released," he said.

The birds are commonly used in the Buddhist ceremonies, Young added.

"They are usually transported to Hong Kong from the mainland in boxes. If one of the birds is sick, the rest are likely to be sick as well since they are crammed in one box," he said.

She contacted 229 religious groups in Hong Kong and 48 admitted they released birds to seek blessings. The groups practiced the ritual one to 18 times each year, releasing as many as 3,000 birds each time.

"There are also people who buy and release birds individually, and there's no way for me to quantify them, so there should be more than these 48 groups," she said.

Figures from the Agriculture, Fisheries and Conservation Department showed 38,000 munia species — including white-backed munia and scaly breasted munia — were imported into Hong Kong in 2006.

One Buddhist group said many of its followers had stopped releasing birds since the outbreak of bird flu in Hong Kong.

"Some of the followers do not feel comfortable getting in touch with birds since bird flu cases were reported. They were worried the birds might be infected," said Winnie Lam, a spokeswoman for the Hong Kong Buddhist Cultural Association Ltd.

Lam recalled they would free over 1,000 birds at one time as part of the ritual, but have now switched to releasing hundreds of fish into the sea each month.

"We believe releasing life can build up one's benevolence and life belongs to nature," Lam said.

The Hong Kong government has called on the public not to release birds as they have little chance of surviving in the wild. But it declined to comment whether the administration has considered a complete ban on releasing birds.

Young said while releasing life is a virtuous deed, people should realize the birds were caught somewhere else before they could be released to perform the ritual.

"It may take more than 150 to provide 100 birds," Young said. "Many might have died before they were delivered in Hong Kong. So are they doing a good cause?"