Dharamsala, India -- Tens and thousands of Tibetans and visitors have reportedly flocked to the Drepung Monastery in the Western suburbs of Lhasa, Tibet’s capital city, on Sunday to celebrate the opening of the annual Shoton (Yogurt Banquest) Festival. 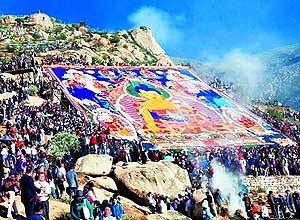 << Tens of thousands of Tibetans and visitors flocked to the Drepung Monastery in Lhasa, Tibet’s capital city on Sunday to celebrate the opening of the annual Shoton (Yogurt Banquet) Festival. Amid huge public acclamations, a huge Thangka painting bearing the image of Sakyamuni, founder of Buddhism, was unveiled to the crowd to mark the beginning of a week-long traditional Tibetan festival.

At around 8:00 a.m., a 35-by-30 meter Thangka painting bearing the image of Sakyamuni, founder of Buddhism, was unveiled on the hillside next to the monastery amid huge public acclamations.

Sunday marked the beginning of the week-long traditional Tibetan festival, which is believed to date back to the 11th century.

Shoton means yogurt banquet in the Tibetan language. The popular festival, originally a religious activity for pilgrims to serve yogurt to monks and nuns who finished their summer retreat, had gradually become a regular theatrical event by mid-17th century.

Also known as the Tibetan Opera Festival; in Tibet, it is held each year from the end of the sixth month to the middle of the seventh month on the Tibetan Lunar calendar.

Over 300,000 people including local residents and foreign tourists attended the opening day of the festival according to a media report.

However, in Tibet; such popular Tibetan festivals, which attract large Tibetan gatherings, are strictly monitored and controlled by Chinese authorities disturbing free celebration of the events. The Communist authorities remain suspicious anticipating possible Tibetan demonstrations against decades of Chinese presence in Tibet.

Earlier this month, at a function during the popular "Horse Racing Festival" in Lithang, in Eastern Tibet, a Tibetan nomad openly shouted slogans expressing Tibetan political and religious aspirations before the official guests. Irked by Rungyal Adrak’s outcry, the Communist authorities quickly arrested him.

Following the incident, Tibetans in the region staged protests demanding his release. In addition, over 200 Tibetans were detained.