Sichuan, China -- More than 200 monks from across the country prayed that those affected by the quake could find comfort. The ceremony was held in Baoguang Temple in Chengdu. 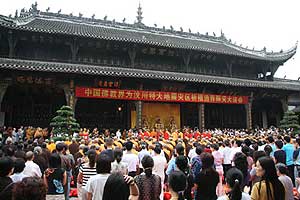 << On May 29, 2008, Buddhist devotees pray for the quake-hit areas at Baoguang Temple in Chengdu.

The monks say the massive disaster has brought great losses and suffering. They want to do what they can to alleviate the pain.

Yi Cheng, Director of China Buddhist Association said "This is a calamity for us all. I personally donated 650 thousand yuan. I want to do what I can to help."

Buddhist groups from the Chinese mainland, Hong Kong, Macao and Taiwan attended the gathering, which included Yi Cheng and Xue Cheng, president and vice president of the Buddhist Association of China.

Buddhist devotees as well as entertainers from Hong Kong participated at the ceremony, which was presided over by Wu Xiaoli, hostess of Phoenix TV.

Ven. Dharma Master Hsin Tao, Ling Jiou Mountain Buddhist Society said "This is an important occasion for us to express our condolences to the dead, as well as to show our care to those who survived but suffered. We want to offer not only money, but also our love and care to help our compatriots to return to their normal life."

After the ceremony, Buddhist societies from across the country donated funds totaling more than 20 million yuan.

This comes on tops of the previous 210 million yuan in cash and materials donated by the Chinese Buddhist societies, including 40 million from Taiwan and 27 million from Hong Kong.

Monks and Buddhist devotees read Buddhist scriptures during the gathering to bring good fortune to the quake-hit areas, hoping that all Chinese will unite to overcome the devastating disaster and its aftermath. More help has also been called for on reconstruction. 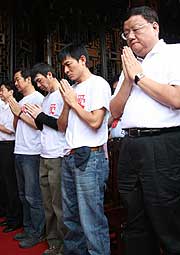 A prayer meeting is an important religious service to Buddhists, in which monks read Buddhist scriptures to avert calamities and bring blessings.

Buddhist representatives took turn to deliver speeches during the ceremony, demonstrating their concern for the quake-hit areas.

"The prayer meeting was really moving and it will bring confidence and comfort to the traumatized souls in the quake-struck areas," said Qi Xiaofei, vice director of the State Administration for Religious Affairs. "Huge disasters can often promote solidarity in society and a nation can learn from them."

Qi also expressed his gratitude for the help from Buddhist circles on behalf of the State Administration for Religious Affairs. More than 20 million yuan (US$2.88 million) was donated during the gathering.