Ship sets off on religious cruise to free suffering souls

Taipei, Taiwan -- A luxury cruise ship departed from Keelung Harbor in northern Taiwan Wednesday on a three-day cruise around the island, with over 1,000 Buddhist monks and nuns on board. 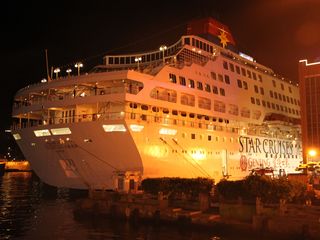 They were all invited to jointly perform a religious ritual on board to free the souls of people who had died in accidents at sea, said Yen Hsiu-hua, chairperson of the Chinese Charity Sailing Foundation that planned the trip.

The monks and nuns will pray for the deceased to rest in peace and be reincarnated in a better world, she said.

They will be joined by 11 others from Japan, who will also pray for the victims in the March 11 earthquake and tsunami, she added.

The foundation leased the Star Cruises ship at a cost of nearly NT$20 million (US$693,000) and spent other NT$10 million to cover the Buddhist masters' expenses during the voyage, according to Yen.

The ship will travel clockwise around the island and return to its departure point.