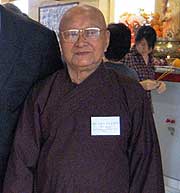 Mr Le leaves a legacy of compassion and friendship after serving his fellow countrymen for more than three decades.

He arrived in WA with his family in 1979 when aged 61 , not long after the first wave of Vietnamese refugees came to Australia.

Establishing the association and first Buddhist temple in the State in Northbridge 32 years ago, Mr Le became a role model for the Asian community by helping to bridge the gap between the differing cultures.

He sponsored more than 600 refugees to live in Australia and was a tireless campaigner against mandatory detention.

Family friend Simon Nguyen said Mr Le was a man who acted from the heart. “His passing will leave a huge gap in the Vietnamese community,” he said.

“He wanted the Vietnamese to contribute to the country, rather than just being a subset. He always pushed people to achieve their best, in a compassionate way.”

Mr Le died aged 93. More than 3000 people attended his funeral, which was held at his Money Street temple earlier this month.