Wollongong, Australia -- A “piling and blessing ceremony” is to be held this Sunday 18 November at the site of the new Nan Tien University and Cultural Centre, with architecture by Woods Bagot. 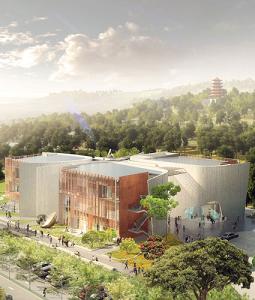 Designed by Woods Bagot, Nan Tien Institute’s new campus will become home to a new education facility and multicultural art gallery that will eventually service over 3,000 students in the Wollongong area.

Working in close consultation with Nan Tien Temple, the largest Buddhist temple in the southern hemisphere, Woods Bagot used the Buddhist symbol of the lotus flower to inspire the design of the building.

“Woods Bagot’s design motivation for this project was to create a relevant new teaching and learning environment for all students interested in pursuing a higher education grounded in Buddhist wisdom. The design is a cultivation of Humanistic Buddhism which welcomes visitors to be immersed in its environment and culture,” said Woods Bagot Principal Georgia Singleton.

The main goal of this project was to translate the cultural significance of this site through to the educational and arts facility. In keeping with the Buddhist teachings of Fo Guang Shan, the design will be devoid of excess and materialism.

“The main focus for this facility is a spiritual one, so the design of the education facility had to first and foremost pursue an ideal, in order to make the transition between the temple and education facility seamless,” said Woods Bagot Associate, John Prentice.

The concept for the building is that it is to be a gateway to the Institute comprised of linked ‘pods’ that perform as a mini campus that embodies an atmosphere that is welcoming to all and has a strong connection to its environment.

“The ‘pods’ are linked by active bridges allowing for the movement through the building to be a journey comprised of moments, destinations and thresholds. The orientation of the voids between the pods are deliberately set to key aspects of the site,” continued John.

The ‘pods’ also place emphasis on the in-between spaces of the campus, which allow for serendipitous interaction between tourists, students, lecturers and visitors.

“This project is designed to not only enrich the local community, yet aspires to continue to attract the international community to not only come and visit but to also to stay and gain the full cultural and educational experience,” said Georgia.

Nan Tien Temple known as “Southern Paradise” is the largest Buddhist temple in the Southern Hemisphere. The temple focuses on the exchange of eastern and western cultures; the interchange of the traditional and the modern; and also the adaptation with the local communities. Not to mention, the nurturing and educating of devotees and the general public.

It attracts more than a few hundred thousand visitors from all over the world all year round. In addition, it plays an important role of propagating the Buddha Dharma and promoting the exchange and harmonization of the eastern and western cultures as well as all religions.

Nan Tien Institute (NTI) will hold a ‘Piling & Blessing Ceremony’ to bless the start of construction of the Illawarra’s newest Tertiary education campus and Cultural Centre and Art Gallery, on Sunday, November 18, 2012.