Monks will plant trees and chant at the official opening of Adelaide's Buddhist cremation and burial garden on Sunday.

Adelaide, Australia -- Chief executive of the Adelaide Cemeteries Authority Robert Pitt told 891 ABC Adelaide the new spiritual site grew out of an error made during a cremation service more than two years ago. 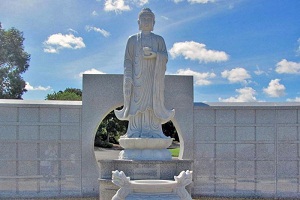 << Photo: A Vietnamese marble statue of Buddha towers over the garden. The Buddha was crafted in Vietnam

"The family and the monks of the Buddhist community usually like to watch the cremation take place. They like to go and inspect the skeletal remains after the cremation and then they like to choose pieces of bone and take those away in urns back to their own homes," he said.

"It's a very, very important part of the cremation process and the funeral ritual for the Buddhist community.

"On one occasion, we made the mistake of starting to grind the skeletal remains before we realised it — we stopped halfway through, we apologised to the family."

"I have to say it was extremely enlightening for us. In those discussions they indicated they would really love to see a Buddhist cemetery in Adelaide and we said 'We'd love to help you'," Mr Pitt said.

"Two-and-a-half years later we [have] the first Buddha and Buddhist burial garden in SA in a cemetery."

Mr Pitt said there were 115 burial sites and 280 cremation plots, including in a wall, with a Buddha statue towering over the area.

It was commissioned and carved from local marble in Vietnam and shipped to Adelaide, where it was carefully located so that Buddha was looking west toward the Adelaide coastline.

"The Buddhists indicated to us they had a very strong preference for having their head to the hills and their feet facing toward the sea [after death], much the way Buddha's looking," Mr Pitt said.

He said people of many nationalities who lived in South Australia were likely to use the cremation facility and gardens of Enfield Memorial Park in the years ahead.

"I think this will become an important place for them, spiritually and in terms of their funeral rites and traditions," he said.