Sydney, Australia -- Tibetan leader His Holiness the Dalai Lama on Sunday wrapped up a five-day Australia tour, which was highlighted by his meeting with Australian acting Prime Minister and Minister for Immigration and Citizenship, Senator Chris Evans. 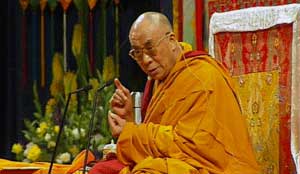 << His Holiness the Dalai Lama delivering teachings on Kamalashila's Stages of Meditation in Sydney (Photo: Tibet.net)

Evans described his discussions with the Dalai Lama that took place on Friday as open and instructive. He said he conveyed the Australian Government's enthusiasm for continued talks between Chinese officials and envoys of the Dalai Lama.

The Tibetan leader yesterday evening met with the country’s foreign minister Stephen Smith in Perth, before winding up his visit to the country. Although the meeting lasted for about 40 minutes, the Australia Tibet Council (ATC), in its update, wrote that the Foreign Minister was yet to comment on the meeting.

Earlier on Friday the Dalai Lama spoke to two hundred members of Australia's Chinese community. The need to build trust, empathy and understanding between Tibetans and Chinese has been described as the key theme of the Dalai Lama's visit to the country. After the meeting he spoke to a group of Chinese journalists, including a journalist from Xinhua, the official Chinese state news agency.

On Sunday the Dalai Lama again met with some 300 Chinese people, including some former officials from the Chinese embassy in Australia and media persons. The meeting was coordinated by the office of Tibet, at the request of China Freedom and Democratic Party based in Australia.

“Expressing happiness over the meeting with Chinese people, His Holiness said on various occasions, the Chinese people, especially those from Mainland have implored him to come to China to give teachings on Buddhism,” the official website of the Tibetan Government-in-exile reported.

His Holiness underlined that Chinese people living outside China must have a clear understanding about the situation of Tibet, emphasising that the issue of Tibet has to be ultimately resolved only between the Tibetans and Chinese without depending on a third party.

“In this regard, I have been making efforts to reach out to the Chinese friends and happy indeed to be able to meet and talk to them,” the Dalai Lama was quoted as saying.

During an open and interactive discussions, the Tibetan leader also reiterated that he was not against the Chinese people, and that he ''totally support Beijing Olympic Games and the torch relay".

His Holiness also conferred the initiation of Chenrezig, the Buddha of compassion, on Sunday. Around 6,000 monks, lay Buddhists and non-Buddhists made a series of Bodhisattva Vows as part of the initiation.

In his closing comments Ian Green, Chairman of Dalai Lama in Australia Ltd., noted that people from 12 countries had attended the teachings, which had been translated into English, Tibetan, Chinese, Vietnamese and sign language, according to ATC. In addition to the 6,000 attending the teachings themselves, a further 4,500 came to a public talk on Saturday. During the visit, the Dalai Lama also spoke to some 600 members of Australia's Tibetans and Mongolian communities, 200 Australian and Chinese journalists and 120 eminent and influential Australians, including 12 Federal Parliamentarians.

The members of the organising committee also offered long life prayers to His Holiness the Dalai Lama and requested him to visit Australia again next year.

With the winding up of the his Australia tour, the revered Buddhist leader also wrapped up a five-day teaching on the Kamalashila's stages of meditation with a message of human compassion.

After a final vote of thanks from Ian Green, His Holiness left Sydney for Perth where he was due to meet Foreign Minister Stephen Smith late in the evening.

His Holiness later left Australia for Jordan, where he will attend a conference of Nobel Peace Laureates.

His Holiness the Dalai Lama will return to Australia to attend the Parliament of the World's Religions in Melbourne in December 2009.