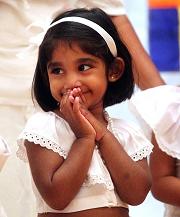 The festival commemorates the birth, enlightenment and death of Buddha.

Organiser Ramitha Fernando said it was similar to what Diwali was to Hindus and what Ramadan was to Muslims.

"It is important to celebrate this on a large scale because once you've left your motherland you are isolated.

"There are no Buddhist temples in New Plymouth.

"It's particularly easy for the young children to forget their culture, their religion and their mother tongue."

More than 125 people attended the fifth celebration held in the province, as well as three monks who travelled from Auckland to take part in the ceremony.

The day began with an offerings ceremony, in which flowers, incense and beverages were passed around a circle to the monks who then placed them on a statue of Buddha.

"That's how we offer things to Buddha," Mr Fernando said.

Sermons followed, and the monks were then offered gifts from the people.

Buddhist songs were also performed by children and their parents.

Mr Fernando said many different cultures turned up to experience the Buddhist tradition and a good time was had by all participants.

"Some of those in our community work as engineers and they brought some workmates along so they were able to come and appreciate our culture and food," he said.

"Our plan is to continue this for many years."