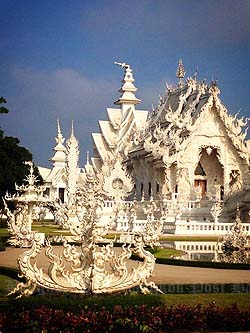 << The tip of a main structure at Wat Rong Khun was damaged after the quake. (Archan Chalaermchai's Fans Facebook photo)

Chalermchai Kositpipat, who was named National Artist on visual arts in 2011, has been working on Wat Rong Khun, the ornate white Buddhist temple, since 1996.

He said on Tuesday the temple, which has become a tourist attraction in Chiang Rai, would be closed indefinitely.

The structure needs to be inspected and various parts demolished, he said.

"We couldn't sleep inside last night because the tremor was almost non-stop. The engineer who built the temple and I checked the damage last night and we thought it wasn't too bad. But come morning we were shocked by the extent of the destruction," Mr Chalermchai, a Chiang Rai native, told a news TV programme on Tuesday.

"The walls of the main structure are cracked, as are my paintings on them. A large part of my painting on one of them even came off," the 59-year-old artist said.

"If the structure is intact, it will take me two years to repaint it. If it isn't, the temple might be closed for good.

"We're desperate. Our works over the past 20 years disappeared in one day," he said.

"The pillars supporting the alley were also cracked and the alley may have to be demolished.

"The tip of the crematory which we finished just a few months ago fell down but the foundation is okay," he said.

"The monk dormitory tower is now like the Pisa Tower and needs to be torn down," he said.

"The damage is enormous as we're 20km from the epicentre. And this was the best case because we took into consideration earthquakes when we built the temple.

"Now I only pray it won't rain because if it does, my paintings would be destroyed."

Before the tremor, Mr Chalermchai made it clear the temple would be his legacy and masterpiece.

"Only death can stop my dream, but cannot stop my project," Mr Chalermchai was quoted as saying about the temple, adding that he believes the work will give him "immortal life".