Bangkok, Thailand -- Several thousands monks and their supporters have assembled at Phutthamonthon in Nakhon Pathom province to demand a prompt endorsement of the 20th Supreme Patriarch. 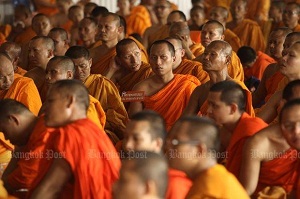 The participants also urged a constitutional stipulation that Buddhism be the national religion.

The monks were led by Phra Methee Dhammacharn, assistant abbot of Wat Maha That in his capacity as secretary general of the Buddhism Protection Centre of Thailand. A network of several Buddhism bodies also joined.

At the 2,500-rai Phuttamonthon, the participants gathered at a yard in front of the great Lord Buddha image.

Soldiers guarded the area but clashes occurred at 1.30pm, when the monks tried to push soldiers' trucks from the area.

Two hours later, soldiers barricaded an entrance with GMC trucks. The monks asked them clear it, saying they would do so themselves if the soldiers did not comply. They claimed Phutthamonthon was an area for monks, not soldiers, and prayed.

The group had four stated objectives. First, it proposed a constitutional provision that Buddhism be the national religion.

Second, it wanted the endorsement of the new Supreme Patriarch without delay.

Third, they would like to show unity so some "renegade monk" who had shown disrespect to the head of all monks realised the show of force was not limited only to Chaeng Wattana. The swipe most likely referred to Phra Buddha Isara, the abbot of Wat Or Noi and co-leader of the People's Democratic Reform Committee who led anti-government protests in 2013-14 on Chaeng Wattana Road.

Fourth, they vowed to protect Buddhism from threats to its security and faith.

The participants were supporters of Somdet Chuang, whose full title is Somdet Phra Maha Ratchamangalacharn, the abbot of Wat Pak Nam Phasi Charoen. He is also acting Supreme Patriarch and a member of the Sangha Supreme Council (SSC), the governing body of monks.

The 90-year-old monk was in January last year nominated by the SSC as the new supreme patriarch. The council acted by the Sangha law, which provides it nominate the monk with the highest title as the Supreme Patriarch and the cabinet will then submit the name to His Majesty the King for endorsement.&nbsp;

Somdet Chuang is viewed as having close ties with Wat Dhammakaya, as he was the preceptor of Phra Dhammachayo (Phrathepyanmahamuni), the abbot of Wat Phra Dhammakaya.

Phra Dhammachayo and his temple have been mired in a scandal involving donations to his temple by a chief of a cooperative, who had allegedly embezzled the funds from the cooperative's customers.

The SSC nomination has been challenged by some people and the prime minister said the cabinet would not endorse the nomination so long as there are conflicts.

Among the most vocal critics of the nomination are Phra Buddha Isara and former National Reform Council member Paiboon Nititawan.

They urged probe into Wat Pak Nam's vintage cars and questioned the interpretation of the Sangha law regarding the nomination.