They are renowned for meditation and moderation, but more than half the country’s Buddhist monks are obese, according to new research

Bangkok, Thailand -- The early morning alms round by saffron-clad monks holding their donations bowls to collect food and drink is a familiar daily ritual in Thailand. 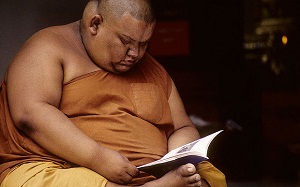 << A heavy set Buddhist monk reads Buddhist philosophy at the entrance to his temple in Chaing Mai, Thailand Photo: Alamy

But scientists have now concluded that the tradition is contributing to an obesity epidemic among the Buddhist monkhood.

For according to a startling new study, nearly half the country’s monks are obese and suffering related health problems such as high blood pressure, diabetes and high cholesterol.

The expanding waistlines are largely filling out because of the donations to their daily diet, researchers concluded. For the alms often consist of drink juices, sweet tea, snacks and street foods – all laden with fat and sugar.

The largely sedentary nature of temple monastic life – with large amounts of time spent in prayer and meditation – is also exacerbating the health woes.

Academics and religious and heath officials and academics have now launched a new campaign to promote leaner clerical living by weaning monks off unhealthy food, teach them how to prepare nutritional balanced meals and encouraging them to exercise.

The aim is to help the monks lead longer healthier lives and also to reduce medical fees as the the government covers such costs for members of the clergy.

Jongjit Angkatavanich, a health and nutrition expert at Bangkok's prestigious Chulalongkorn University, said the study showed that 48 per cent of monks are obese.

"Obesity in our monks is a ticking time bomb," she told the Bangkok Post. Her study found 42 per cent of monks have high cholesterol levels, 23 per cent suffer from high blood pressure, and more than 10% are diabetic.

Although there has been disagreement about measures of obesity, the increasing challenge of overweight monks is not in doubt.

The university’s Faculty of Allied Heath Sciences university has teamed up with religious organisations to launch a national programme to combat monk obesity.

They have already started a trial project to train cooks and officials at Mahachulalongkornrajavidyalaya University, one of Thailand’s two public Buddhist universities.

The emphasis was on preparing meals with added protein, fibre and calcium and encouraging monks to increase their physical activity.

The results were immediate. Among 82 monks with obesity problems who were attending religious programmes at the college, the clerics lost 2.2 pounds (1kg) on average and reduced their waistlines by more than half an inch during the eight-week programme. One monk said that he shed as much as 22 pounds (10 kgs).

Chulalongkorn Medical Hospital has also provided monks with a specially-designed girdle to wear so that they feel the squeeze if they over-eat and gain weight.

The obesity phenomenon is another blow to the image of a religious institution whose members are supposed to have opted for lives of austerity, meditation and asceticism, eschewing materialism and excess.

Several financial, sexual and jet-set lifestyle scandals and have embroiled senior clerics in recent years in a country that is 90 per cent Buddhist.

And Thai Buddhism does not currently have a spiritual leader as the appointment of a new Supreme Patriarch has been caught up in another long-running controversy.

The confirmation of the 90-year-old abbot nominated by the supreme clerical council has been ensnared in an investigation of an alleged tax evasions scam involving a vintage car and his links to a controversial temple.

The stand-off developed into remarkable clashes between monks and soldiers as supporters of the abbot, Somdet Chuang, tried to stage a protest in his favour.

The cleric is being investigated for allegedly acquiring a vintage Mercedes-Benz through a tax evasion scheme. He has denied any wrongdoing.

But he is also associated with the Dhammakaya sect that is under scrutiny for allegedly amassing a fortune as well as ties to the deposed ex-prime minister, Thaksin Shinawatra.