Bangkok, Thailand -- Under the auspices of the International Association of Buddhist Universities, a two-day 13th Annual United Nations Day of Vesak (UNDV) Celebration was held recently with the theme "The Buddhist Path to World Peace". The opening day, a short seminar on "Buddhist Education for Peace" was held. 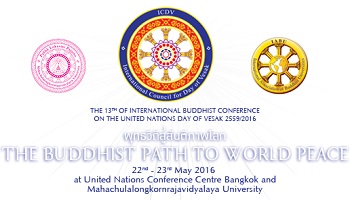 The final day of the conference was held at the United Nations Conference Center in Bangkok with a short seminar on "Buddhist Contributions to Environmental Responsibility for World Peace".

This year, the International Council for the Day of Vesak had decided to scale down the celebrations to ease the burden of the Thai government, which had generously sponsored the event in the past decade; it was informed by the organizers. This time only free food and longing was provided and travel cost was picked up by the participants themselves.

Thus, instead of usual academic conference at large scale, two-hour topical seminars which will be held on the main stage, along with the normal celebratory activities.

The General Assembly so resolved (Agenda Item 174 of Session No. 54) and accordingly the UN Day of Vesak was instituted in the year 2000 with the support of all Buddhist traditions.

It was also decided to celebrate the UN Day of Vesak as a two-day conference hosted by Mahachulalongkornrajavidyalaya University of Thailand and graciously supported by the Royal Government of Thailand under the guidance of the Supreme Sangha Council of Thailand.

At an earlier conference, it was urged to protect the cultural and environmental integrity of two of the World Heritage sites in India, Lumbini, the birth place of the Buddha, and Bodh Gaya, where he attained Full Enlightenment: we emphasize the serious concerns of the Buddhist communities worldwide and implore the authorities concerned to prevent further harmful effects of air pollution around those sacred places for the future of humanity.
TOP