Bangkok, Thailand -- A total of 10,000 copies of a book said to be the world's first and formal international version of the Tripitaka Buddhist scriptures will be distributed to countries around the world, Mahachulalongkornrajavidyalaya University revealed on Saturday. 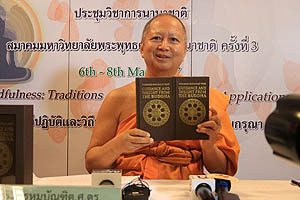 Printed in several languages, copies of the Common Buddhist Text (CBT) will be distributed to airports and hotels worldwide to mark the Day of Vesak (Visakha Bucha Day) on Wednesday, said Phra Brahmapundit, rector of the Buddhist university.

The book contains notions and Buddhist scriptures compiled from the three sects of Buddhism -- Theravada, Mahayana and Vajrayana.

A meeting was held for international academics from the three sects to discuss what should be included in the CBT, said the monk, adding that the book is written in correct language and easy to understand.

Phra Brahmapundit served as the main editor of the CBT while Peter Harvey, an Emeritus professor of Buddhist Studies at the University of Sunderland and author of several books on Buddhism, served as general editor.

The university in cooperation with the International Association of Buddhist Universities is holding a range of activities from yesterday until tomorrow.

An international conference on Buddhist universities was yesterday opened by Somdet Phra Ariyawongsakhatayan, the Supreme Patriarch.

Her Royal Highness Princess Soamsawali will preside over the formal event to celebrate Visakha Bucha Day at the conference centre at about 2pm tomorrow.
TOP