Nam Khem, Thailand -- THERE will be a new sound in Nam Khem on Sunday, as a swelling band of converts heads to church on Christmas Day for the first time. 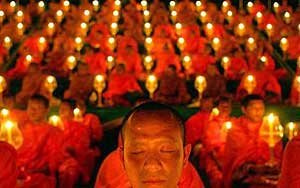 << Candlelight vigil … Buddhist monks pray for victims of last year's tsunami. Some Thais have since converted to Christianity.

There is none of the Christmas commercialism that blankets Bangkok in this battered little fishing village north of Phuket, which lost close to 1000 people in last year's tsunami. But as aid organisations, many with Christian connections, have invested heavily in the reconstruction programs here, conversions have followed.

Nam Khem's Buddhist abbot, Wirort Titapinyo, estimated 10 to 20 per cent of the 3500 surviving villagers have changed their religion since the tsunami.

"They changed because of material [things], boats, homes and money as well," he said. "Some people who were converting are still hiding, they are shy about it. They just think about the money, think about the material things."

The village chief, Satearn Petchkhiang, does not know which Christian groups are working in his village, because they don't have to register, but he thinks the conversion rate is closer to 10 per cent.

In the province of Phang Nga, where Nam Khem is located, there are 27 new churches.

The director of Khao Lak Mental Health Recovery Centre, Dr Benjaporn Panyayong, said the Christians had rebuilt houses and given rice and Bibles.

"Many people don't know if they are Baptist, Seventh Day Adventist. I think some [villagers] take the material and tell that they have converted and then convert back," she said.

Divisive anecdotes of people being paid to convert are rife but the Herald found no one who admitted to it.

Tawin Kooprasert, 37, was converted in May by a Thai Church of Christ mission from Chiang Mai in the north. "They asked how was my mental state, whether anyone in the family had died, was I happy now? They gave no money," she insisted.

Eric Johannsen is an American Bible teacher working with Calvary Chapel, a church set up in the shadow of Nam Khem's best known post-tsunami landmark, a stranded fishing trawler. Mr Johannsen, who arrived to work in Thailand before the tsunami, said: "Missionaries have been coming to Thailand for 100 years without taking root. So when something [suddenly] gives growth [to conversions] people assume, ascribe it to buying houses.

"But people have experienced a terrible thing in their lives and the religion they had wasn't meeting their needs," Mr Johannsen said. He agreed many people came initially to see what they could get materially and their church numbers had fallen to 30 members, as people realised it was not a wealthy church.

Kian Thongtae, 83, did not convert despite generous assistance from foreign supporters. The portable fan was donated "with love" from ServLife International and her refrigerator by a private American citizen. A new family fishing boat came from the Germans. Kitchenware, water tanks and garbage bins also came from the Christians.

Mrs Kian said she did attend a free lunch and Christian rally several months ago where four big buses were used to bring 200-300 people from all over town to listen to the Christians, some foreign, but mostly Thai. After lunch they said anyone who drank water with them would be a Christian.

"Quite a few people converted but I think some of them just needed to drink; they had just eaten. Some villagers have the view if you become a Christian you will get a new house, money," she said.

The Christians had visited her at home, given her a book in Thai, possibly a Bible, with two hands clasped on the cover, and told her if she wanted things, first she had to pray.

"I know they are very good people, but I didn't become a Christian," Mrs Kian said.