"Monks are supposed to renounce money. The teachings of the Buddha have been killed by the demonic religion of consumerism" - Sulak Sivaraksa, Buddhist scholar

Bangkok, Thailand -- For advertisers in Thailand, the most spectacular location to promote their products is on the side of the country's tallest building, the Baiyoke Tower in Bangkok. 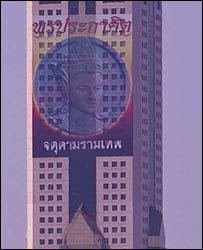 But the image that appeared there a few weeks ago was not the usual logo for shampoo or a mobile phone company.

It depicted the statuesque head of a mythical Hindu figure, Jatukam Ramathep - actually a combination of two ancient deities, the guardians of some of Thailand's holiest Buddhist relics.

So what was it doing on a Bangkok skyscraper? The answer is that was selling itself, and doing a whole lot better than the rest of the Thai economy.

Thais have always been keen on amulets. Usually bearing the likeness of the Buddha or other religious figures, they are worn round the neck to bring good fortune.

But no amulet has ever been as popular as the Jatukam Ramathep.

These amulets have been made for about 20 years, and were promoted without much success by Police Major-General Phantarak Rajadej, a police chief in Nakhon Si Thammarat, the town where the relics are thought to be located.

A larger-than-life character who was reputed to possess magical powers, his funeral was attended by tens of thousands of people, including Crown Prince Vajiralongkorn, the heir to the Thai throne.

Copies of the amulet were given out at the funeral - many of them not authentic, complained his family - and belief in their mystical powers began to spread, pushing up the value of older versions.

On Sunday mornings, crowds build around the main temple in Nakhon Si Thammarat, Wat Mahathat, one of Thailand's most revered Buddhist temples.

They file between the heavy white-washed walls into a small room, filled floor-to-ceiling with an array of statues depicting giants and mythical animals, all bedecked with flowers. 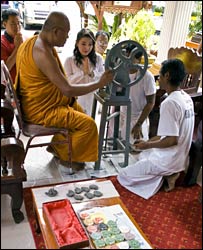 << The abbot at Nakhon's temple is in high demand

There they pray on their knees, holding incense sticks, before the gilded figures representing the two gods, Jatukam and Ramathep.

Almost everyone is wearing one of the amulets, some small, some as big as beer mats and very garish.

To be endowed with real power, an amulet must be blessed by a senior monk at the temple.

So when I visited, there was a long queue waiting to see the abbot, Phra Rajthamsuthee. One group had driven 1500km (900 miles) from Chantaburi to see him.

The temple has an old metal foot-powered press, and a clay mix for the tablets which usually includes sacred material like ash from temple incense.

I watched the abbot use the squeaky press to make the first few, and then splash holy water on a batch that had already been baked and glazed.

He did not want to talk about how much he charges for this service, but local people suggested it would be US$1500-$3000. No wonder the temple has some ambitious refurbishment plans.

The amulet business has literally taken over the town.

All-day trucks with loudspeakers drive around blaring promotions for the latest series of amulets, with names like the Super-Rich Millionaire series, the Rich as the Heavens series and the Money Falling Like Rain series.

Huge, colourful posters cover every wall. It is a staggeringly lucrative business, estimated by one financial research group in Bangkok to be worth 22bn baht (US$650m, £320m) this year.

Nakhon Si Thammarat's little airport now sees four times as many flights coming in every day as it did in the past. Believers come from as far away as China and Singapore.

I ran into Preston Cheng, a Bangkok-based exporter with a group of colleagues on a day tour to the temple.

His friends kept teasing him that he was already rich, and he did not need the amulet. But he admitted, slightly embarrassed, that he did believe in its powers, and he already owned several of them.

All around him there were stalls selling a bewildering variety of them, some simple clay tablets imprinted with a likeness of the deity, others dyed in rainbow colours or glittering with gold.

I found it hard to fathom the credulity of buyers.

Why would they believe in the powers of amulets now being produced in their tens of thousands? Why do some cost just a couple of hundred baht, others several million?

How do you know whether a "rare" or "first edition" amulet is genuine? And what has this obscure, apparently Hindu deity got to do with modern Buddhism? 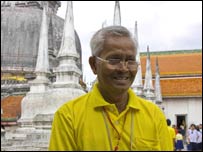 Ajarn Narit, a local guide and historian, told me it was partly to do with the times, and partly the nature of Buddhist belief in Thailand.

With the political situation still so uncertain, people feel the need for re-assurance, he said. Buddhism has always been based on faith in many things, he said, not just one god.

"We believe in reincarnation, in karma, in the accumulation of merit, and it is all too easy to believe in the power of other supernatural beings," he added.

But it is easy to see this frenzy being driven by another, less spiritual motive.

As earlier versions have rocketed in value, people have been buying up later editions in the hope of selling them on for a profit. It works like pyramid selling.

Veteran Buddhist scholar Sulak Sivaraksa is disgusted by what he sees as a perversion of the teachings of the Buddha.

"They've lost their way", he said. "Monks are supposed to renounce money. The teachings of the Buddha have been killed by the demonic religion of consumerism."

And like all pyramid schemes, this one is beginning to unravel.

As I write, with millions of Jatukam amulets manufactured, prices are plunging. But the craze has already made a lot of people in Thailand very rich.