Bangkok, Thailand -- Allegations that the widely advertised Somdej Nue Hua amulets are less than what they claim to be, once again highlight the need for the Sangha Council to regulate sales of religious paraphernalia. 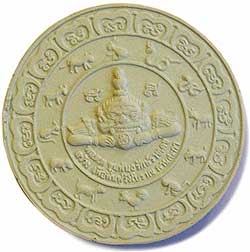 The case erupted last week when Thanpuying Putrie Viravaidya, deputy principal private secretary to His Majesty the King, made a complaint to the Religious Affairs Department over commercials for the 999-baht amulets that implied a link with His Majesty both in the name, the imprint of the royal crown on their back, and the claim that flowers given by His Majesty were included in the materials used to produce them.

The Department of Special Investigation is now tackling the case and may bring charges against the producers of the high-profile amulets, which have been reported to be selling well. According to Thanphuying Putrie, the King never donated dried flowers that could be used to give blessings to the amulets. Moreover, she claimed, the Office of His Majesty's Principal Private Secretary never gave permission for the amulet makers to use the insignia of the Phra Maha Phichai Mongkut, a crown worn by the King in royal ceremonies, as part of the product.

Thousands of unsuspecting consumers bought or made reservations for the amulets, based on the belief that they boast royal connections claimed in the advertisements. Now many are demanding a refund, but it is unclear if they will get one.

If indeed the amulets have no connection to the palace, then the amulet makers should be prosecuted for false advertising misleading the consumer. However, what may be more important is for the Sangha Council and the palace to cooperate to ensure that an episode like this does not recur.

The advertisements for this particular amulet in question had run in many major newspapers for months prior to last week's revelation. Perhaps the ads only came to the attention of the Sangha Council and palace officials recently, but it seems more likely that someone would have known earlier that the ads were false and should've been revoked. If this was the case, then officials should have been much more proactive in pulling the ads so consumers could be protected.

In the future, the Sangha Council, the Department of Religious Affairs and the Consumer Protection Board should work together to more rigorously regulate the amulet industry, which took off this year with the emergence of the wildly popular Jatukarm Ramathep talismans.

The rampant commercialisation of religious icons has opened up plenty of opportunities for fraud. Any monk or temple could conceivably produce an amulet made of some sacred object and then sell it at exorbitant prices. Many people who buy amulets do not have the time to conduct proper due diligence and trust that religious people would not deceive them. It would not be difficult to set up a system in which any amulets that are advertised in the media or sold at temples could have a seal of approval from an authority that guarantees their authenticity.

Corruption in temples is not often discussed but needs to be taken seriously. Except for a few outspoken monks who promote transparency among temple finances, the Sangha Council has done little to clean up the sacred religious institution.

This is an injustice to all those who spend their hard-earned money at local temples in order to make merit. The Sangha Council should go out of its way to boost public confidence in the integrity and honesty of temples, and launch an aggressive campaign to purge those who prey on religious folk who purchase amulets out of pure faith.

Without a clear set of rules and clean administration, the few bad apples who exploit the religious devotion of many Thais have the potential to taint those who produce amulets not solely for commercial gain but for religious merit.