Songkran: Decline of a beautiful tradition

BANGKOK, Thailand -- The gentle and respectful practices of Songkran (Thailand’s Buddhist New Year) in the past have degenerated into a water-hurling frenzy that needs to be curbed because of the danger it poses. 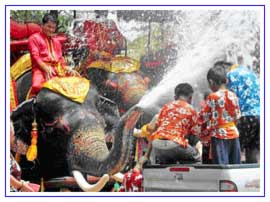 Until it was taken over by hooligans many years ago, Songkran used to be a beautiful festival. It used to be that only small amounts of cool, perfumed water were sprinkled on family members and friends as a form of blessing to usher in the traditional Thai New Year.

Then some people came up with a not-so-nice idea: Why scatter droplets of water on the people you care about when you can go on a rampage drenching total strangers with buckets of water for laughs? Unfortunately, the practice caught on and Songkran is now known mainly for the water-throwing melee.

Some people went a step further. Instead of using water pistols or buckets of water in fun water battles with their neighbours, they started going around in pick-up trucks loaded with huge water containers to increase both the impact and range of their splashing.

That’s where the problem began. The throwing water on moving vehicles, including city buses, passenger cars and motorcycles, contributed to a sharp spike in road accidents during Songkran. Riders lose control of their motorcycles and crash because of water thrown at them, resulting in injury and sometimes even death.

It is therefore good to hear that the metropolitan police will restrict the movement of water-carrying trucks used by Songkran revellers this year in a bid to curb the dangerous practice.

That will not only help bring down the number of road accidents, which tend to peak during Songkran, but also enable many people who do not enjoy such crude water-throwing festivity to go about doing their business in peace.

People must be reminded that Songkran is not just about water-throwing and general merry-making; it is a time for family reunions, for family members to show respect to their elders and enjoy each other’s company on this joyous occasion.

Of course, we cannot stop people from enjoying their Songkran in the way they want. People whose idea of fun is dousing each other with water will continue to do so.

But the line must be drawn when people who have to go to work during Songkran, or who simply don’t want to be soaked, feel they are being harassed by the water-throwing hordes.