Bangkok, Thailand -- Celebration calls for reflection to find ways to solve current problems in light of the Buddha’s principles. In his address during the closing ceremony Prime Minister Abhisit encourages the nation to build peace, promote sustainable development and defend human rights. Buddhist elder calls for transparency and good government for the good of the country. 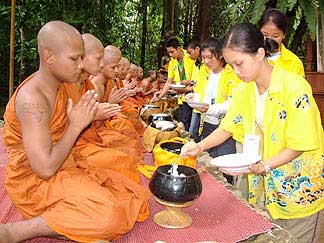 Vesak, the holiday that celebrates the birth, the enlightenment and death of the Buddha, has become a time to reflect together about the challenges thrown at Thai society by the rest of the world, not least the current financial crisis, challenges that require urgent and effective responses that must come from analysing one’s own values and the “noble truths” promoted by the “enlightened one.”

For this purpose the sixth International Buddhist Conference was held on 4-6 May to coincide with the United Nations Day of Vesak under the auspices of the Thai government in cooperation with Mahajulalongkornrajvitayalai University and the United Nations, which declared Thailand ‘World Centre of Buddhism.’

The event was held in the auditorium of the university, one of the most prestigious centres of Buddhist learning in the country, which is located in the Wang Noi District of Ayutthaya Province, attracting 1,200 monks from 80 countries.

Implementing Buddhist principles at a time of world crisis and find responses to environmental, economic, political and social problems was one of the topics addressed at the conference.

“Concentration and the practice of the Four Noble Truths (suffering, cause of suffering, nirvana and the path to end suffering) can enable peace to reach peace,” she said.

Prime Minister Abhisit Vejjajiva, who presided over the closing ceremony, in his address encouraged the “Thai people to practice the three pillars of Buddha’s teachings: building peace, sustainable development and human rights in everyday life for the good of the country.”

Such words are meant to encourage Thais to seek unity and work together at a time when the country is still reeling from deep political divisions which have led to violence, paralysed the capital and caused deaths among sympathisers in various factions.

“All crises originate from the lack of morality,” said the Venerable Phradhamakosajarn, dean of Chulalongkorn Buddhist Academy and president of the United Nations Commission to commemorate Vesak. “It is necessary to administer with transparency and on the basis of the principle of good governance for the benefit of the country.”

“I would like to praise the Prime Minister Abhisit for successfully solving the political crisis which occurred recently during Songkran Festival through the use of loving kindness and wisdom,” the Venerable Phradhamakosajarn added.

About 90 per cent of Thailand’s 62.2 million people practice Theravada Buddhism, brought to the country from India around the 3rd century BC.

This tradition follows the Pāli Canon, the standard collection of Buddhist scriptures, known as Tripitaka in the Theravada tradition.

This year Vesak in Thailand falls on 8 May.
TOP