A group of monks from remote Cambodia are protecting their local forests and fighting climate change with Buddhism, not science, as the inspiration

Phnom Penh, Cambodia -- Tha Soun and his fellow monks from nearby Samraong pagoda have presided over a 44-thousand acre forest known as Sorng Rukavorn, or simply Monk Forest, for a decade. These days it seems a serene garden, but it wasn't always so. 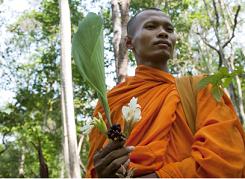 << The young, novice monk Sar Vy says he doesn't need to understand the science of climate change to know that his country and its people as well as the wider world benefit from forest conservation. (Photo: Brendan Brady)

Tha says that not long ago, police and soldiers would come here to poach timber.

"I would advise them to stop if I thought they might listen," Tha says. "But if they wouldn't listen, I would just take away their chainsaws and weapons."

Tha says he and the other members of his Buddhist community have succeeded in protecting the forest because they are respected spiritual figures. But his experience before he became a monk certainly helps as well.

"The soldiers don't scare me, because I used to be a soldier, too," Tha says.

This determination helps preserve the forest for use by both the monks and the local community. Now, the effort could also provide lucrative for Cambodia.

Monk Forest is one of 13 community forests totaling more than 250 square miles in Odder Meanchey province whose value in fighting climate change is being marketed in an international exchange of what are called avoided deforestation carbon credits. That's a mouthful that basically means Cambodia hopes to get paid by outsiders not to cut down their trees.

The credit market is based on the fact that forests absorb huge amounts of heat-trapping carbon dioxide. The effort is meant to help curb rising CO2 levels by preserving as much forest land as possible.

Tha acknowledges that climate science is new to the monks here, but he does understand that with climate change a lot is at stake for his country, because most people here survive off the land.

And Tha says preserving forests has always been important in Buddhist tradition.

"It was under a tree that Buddha was born, achieved enlightenment and passed away," Tha says.

So like Buddha, Tha spends much of his time in ritualized performances under the forest canopy.

But such natural temples have become harder to find in Cambodia. More than a fifth of the country's forests have been cut down over the past twenty years.

Today, large-scale logging has been reduced but big timber sales continue, even in protected areas. Tha says when that happens, local people can no longer get any benefits from the forest,

Here in Monk Forest, on the other hand, local residents can still share its abundance. And they also help monitor and protect the forest.

Thirty-four-year-old volunteer Choun Chun says the monks have taught him about the value of conservation.

"When I was young, I was tempted to cut the trees for profit," Choun says. "But, slowly, I realized the forest was important for our society. If we cut the trees, we destroy ourselves."

Destruction has been widespread in the area in recent decades. Oddar Meanchey province was the hideout of remnants of the murderous Khmer Rouge regime for almost 20 years after they were overthrown in the mid 1970s. In those years they funded their insurgency by selling timber in nearby Thailand.

Today, the area remains poor and isolated, which makes illegal logging tempting. The carbon credit deal is meant to address this by essentially offering a reward for protecting the forest. By one estimate, the credits for all 13 forests could be worth as much as 50 million dollars over 30 years.

But the carbon credit process is largely untested, and critics worry it could be vulnerable to corruption. Kuy Thourn, who's a local leader in a village near Monk Forest, says he's not sure his community will ever see any benefit.

"We will have to find out."

A government representative recently visited the area to assure villagers that they will benefit from the deal. But skepticism is rampant, and monk Tha Soun worries that it will be difficult to convince some Cambodians of the importance of protecting their forests. But he says he remains committed, no matter what.

"I decided to become a monk because we Cambodians believe it is the duty of some boys to keep the religion alive and clean the sins of our parents," Tha says.

For Tha, those sins include the past generation's mistreatment of the forest. He says he's determined to help save Song Rukavorn, and as much forest land here in northern Cambodia, as he can, for sustainable use, and spiritual contemplation.